Due to the gigantic sinkhole that tore through its hall of fame Skydome in February 2014, the National Corvette Museum in Bowling Green, Kentucky has received overwhelming attention and an increase in attendance. The facility dedicated to preserving the legacy of Chevrolet’s iconic sports car is a Mecca for auto enthusiasts–and for good reason.

If you haven’t made the trip to lower Kentucky, here’s what you need to know.

Directions: Take exit 28 off of I-65. At the first traffic light, turn left past the gas stations and you’ll soon see the Corvette Museum on your right (turning right at the traffic light takes you to the Corvette Assembly Plant). Bowling Green is an hour north of Nashville and almost two hours south of Louisville.

Parking: Plenty of free on-site parking is available at the Museum parking lot

Cost: Admission is $10 for adults, $8 for seniors, and $5 for children 6-16 years old. Children under 6 and active military personnel are free. AAA and group discounts are offered.

Rules: Apart from not allowing pets or letting anybody touch the cars for any reason, there are few other restrictions. Food is confined to certain areas. Photographs are allowed.

Handicap Accessible: Yes, the museum is a single-level building which can be accessed by those with mobility aids 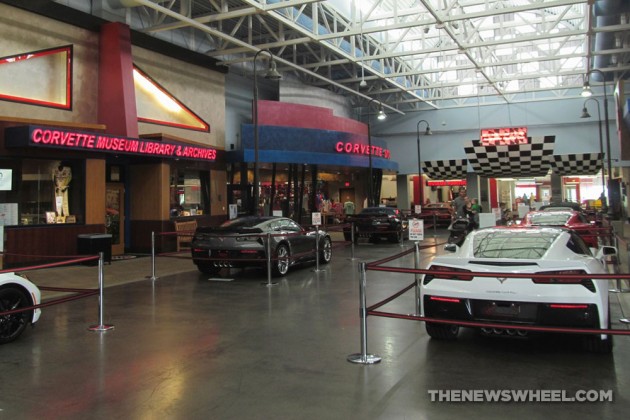 The main hall of the Corvette Museum, upon entry

The National Corvette Museum of Bowling Green is a thorough exploration of the development and legacy of America’s sports car. Despite being non-profit and admission/donation-funded, it has developed into a staggering facility filled with special models, interactive displays, and multimedia presentations. From a look at the seven (currently) generations of the ‘Vette to the model’s racing heritage and mechanical innovations, numerous exhibits spotlight the model’s history.

Visitors check in at the admission desk at the end of the hall and pay their entrance fees; they’re given a wristband that gives them access to the archives and the main museum, which is a self-guided tour of the many exhibits. Visitors begin by watching a video in a movie theater about the history of the model before continuing through the halls of production models, concept cars, and racing models–plus a garage-themed children’s play area. The sinkhole has been repaired and is being converted into a permanent “Sensorama” re-creation.

The museum is organized in a single path that circles back to the main hall, ending at the special exhibit (at the time I visited was “From Moonshine to Finish Line: The History of NASCAR”) and the sizable gift shop.

In addition, the Corvette Café is on-campus, serving classic American food (like breakfast sandwiches, wraps, burgers, and milkshakes) in a retro diner. The eatery is open daily from 8:30am–3:30pm (except on Sundays when it opens at 10:30am).

Your entire visit to the Corvette Museum will probably last three hours. 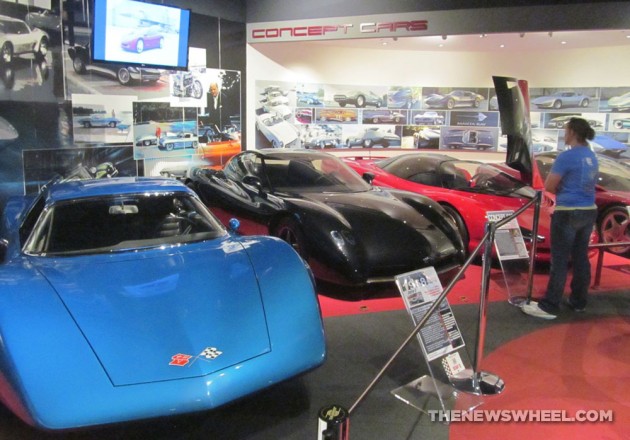 The hall of concept versions of the Corvette

In direct contrast to the Corvette Plant tour across the street (which is confusing to find and crowded upon entering), the Corvette Museum is easy to navigate, spacious, and welcoming. Upon entering the main atrium, visitors will find themselves in a main hall connecting the cafe, archives, restrooms, gift shop, and museum exhibits entrance. It’s a great layout, including for large groups touring together, and puts the focus on why visitors are here: seeing the ‘Vettes, which line the entry hall.

The admission price is a great deal for the amount of exhibits there are to see and the effort made in displaying the cars. Instead of being a giant parking garage, many old models are surrounded by their original context with life-size diorama displays from corresponding time periods. While the total awe that saturates the information kiosks about the ‘Vette might not extend to visitors who simply aren’t automotive fans, attending the museum won’t be painful to family members or spouses being dragged along. It isn’t the most fascinating car-themed museum you’ll ever visit, but it’s an appropriate tribute to Chevrolet’s sports car.

I would recommend attending this museum before going to the nearby assembly plant tour so you can learn about the history and uniqueness of Corvettes before seeing them built; that way, the insider experience is that much more meaningful. 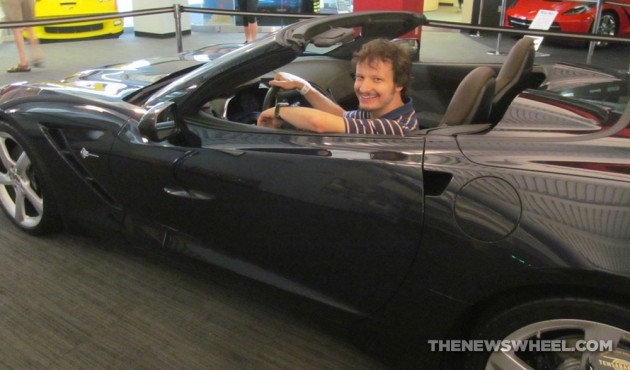 You might even get to sit inside a Corvette!