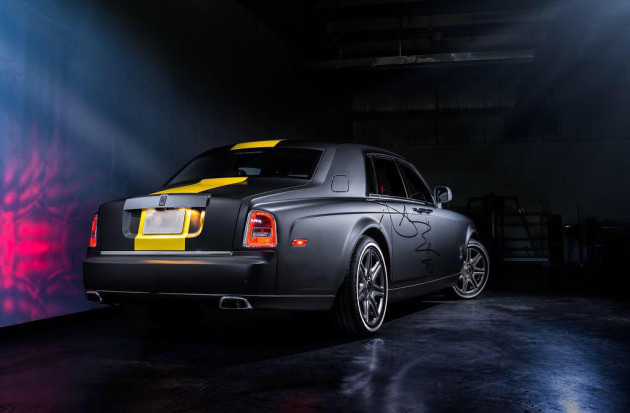 Pittsburgh Steelers wide receiver Antonio Brown is one of the most exciting and dynamic player’s in the NFL, so it’s only right he drives a customized Rolls Royce Phantom that has just as much swag.

ESPN reported that Brown doesn’t actually own the Phantom, but Rolls Royce has loaned the $500,000 luxury automobile to the NFL player so he can drive it to training camp. That’s the kind of treatment you’d expect him to get after leading the NFL with 129 receptions and 1,698 receiving yards last season.

Brown’s signature was worked into the paint on the right side of the Phantom. The performance car also features a custom grille and stripe across the middle to match the colors of Pittsburgh’s jerseys. The color wrap was installed by Wrap Graphics and designed by 3M Graphics.

The 2015 Rolls Royce Phantom comes with a 6.8-liter V8 engine that produces 453 horsepower and 531 lb-ft of torque. Combine that power with the vehicle’s eight-speed automatic transmission and this machine can rocket from 0 to 60 mph in less than six seconds.

Here’s a video of the work Brown had to put in to earn the right to drive this Rolls Royce: