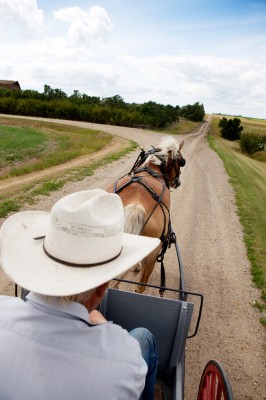 Police suspect Amish buggy in hit-and-run…looks like someone’s getting shunned.

Either someone had a little too much hooch during Rumspringa, or else he’s got some ‘splainin’ to do. That’s because an Amish buggy was allegedly involved in a hit-and-run accident in Pennsylvania this past Saturday.

Reportedly, the incident happened at an intersection in Wilmington Township, Pennsylvania, where the buggy struck a Honda CR-V. But because the Amish are a thorough people (I mean, have you seen their furniture), the buggy driver hit the CR-V not once, but twice, then fled the scene. No reports yet show if the horse was implicated in the crime.

According to The Smoking Gun, the driver of the 2009 CR-V, Michelle Cooper, 36, described the buggy as “flying like a bat out of hell,” although I’m sure the criminal would have preferred the use of “heck” here. After the initial collision, the buggy continued on, so Cooper pursued the fleeing carriage. When she eventually pulled in front of the driver to cut him off and leapt out of the car, the young Amish “kid,” sans beard, just “threw his hands in the air” and continued onward. But, of course, not without banging into her driver’s side door (which had been left open).

In total, Cooper says damages have been estimated at $3,000.

Police are still on the lookout for the suspect. As he seems like an erratic drunk driver, I’d suggest starting at the local bar. He’ll be the only one there who isn’t on his cell phone.