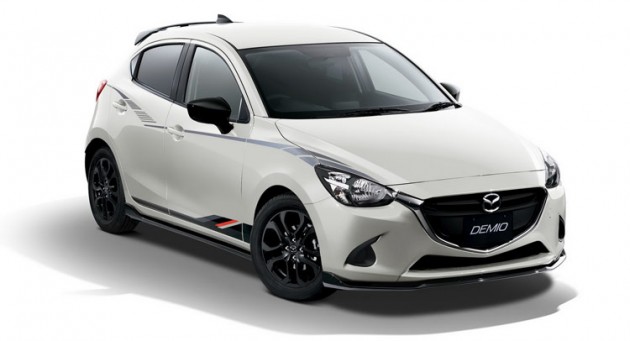 The Mazda2 might not be the hottest Mazda model being advertised in the United States (as it’s far overshadowed by the heavily-hyped 2016 MX-5), but it’s consistently been a hit in the automaker’s home country–where it’s known as the Mazda Demio. On the heels of winning the Good Design Award, Mazda has unveiled a couple modification concepts of the Demio in Japan, the most recent being the Mazda Demio Racing Concept.

This version was on display last weekend at the 2015 Motor Sport Japan Festival in Odaiba–one of the country’s biggest automotive events.

New Models: A look at the redesigned CX-5

Under the hood, the engine remains the same: a 105PS 1.5-liter SkyActiv-D diesel (or 1.3-liter gasoline) with a 6-speed automatic transmission. However, lowered suspension and improved brakes have given the hatchback increased agility. Still, a boost in horsepower would’ve been handy.

Mazda’s intent with the racing concept is to manufacture it and sell it to race teams who would like to run it in dirt or rally-type events. Thus, this concept model is anticipated to go into production in fall 2015.

In January, Mazda revealed a similar concept vehicle at the 2015 Tokyo Auto Salon. Also a Mazda2, that modified model looked a big more aggressive–though little was heard about the modified concept after the conclusion of the event.

Trial by Fire: Mazda3 gets tested by driving over flames