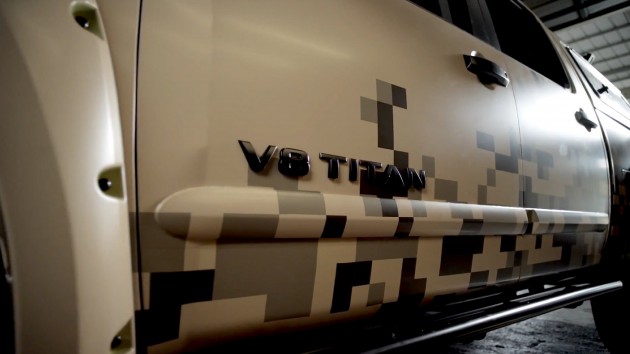 Nissan has released the latest video in their series chronicling the various stages of Project Titan. This new video takes a look at Project Titan Phase Three, which deals with the customized truck’s wheels, lights, and exterior wrap.

In this final phase, we are given a look at the 3M custom digital camouflage wrap that adorns the outside of the Titan after winning 36.1 percent of the Facebook fan vote. The wrap is said to have taken three weeks to develop and required three men to work for more than three days for the application.

The winner for wheels were the 18” x 9” polished aluminum Fuel Revolvers in matte black, which are wrapped in Nitto Grappler M/Ts.

There’s also a high-utility roof system, which is equipped with 20” double row LED lighting with 120 watt draw covering 360 degrees of visibility around the truck. The Bulldog LEDs took 46.9 percent of the fan vote.

Finally, we see that the interior has been equipped with Katzkin leather seats embroidered with the Project Titan logo and a Rockford Fosgate premium sound system.

The final reveal and the eventual trip into the Alaskan wild are the final steps in this journey, so stay tuned for more as it develops.