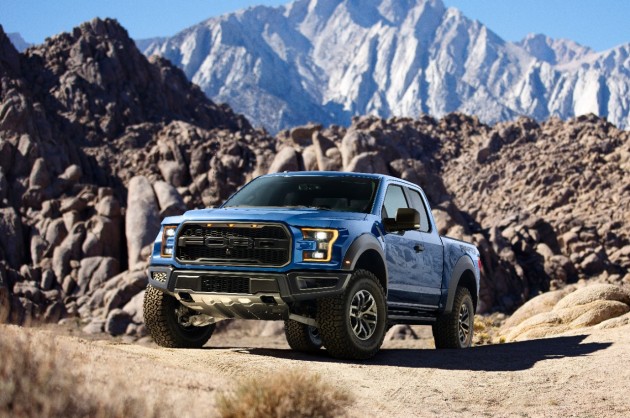 We’ve all been hot to learn more about the 2017 Ford F-150 Raptor since its debut, and while we haven’t heard anything official in the way of specs or stats, Ford Global Product Development Vice President, Raj Nair, appears to have spilled the beans when it comes to horsepower.

In an interview that took place on Fox Sports during this past weekend’s coverage of the Rolex 24, Nair let fly that the 2017 F-150 Raptor’s 3.5-liter EcoBoost V6 will produce 450 horsepower. This means that skeptics of a non-V8 Raptor can rest assured that the next-gen model will be about 40-horsepower better than the outgoing Raptor.

Oh, and it’ll be about 500 pounds lighter than the V8-powered Raptor, so it’s also likely to be quite a bit better in terms of fuel economy.

While we’ll need to wait a while longer before we hear anything official about output or economy or trailering or max payload, we do know a few things. The 2017 Raptor F-150 will be offered exclusively with the 3.5-liter EcoBoost V6 mated to a 10-speed automatic paddle-shift transmission. It will also feature a new four-wheel-drive, torque-on-demand transfer case and many of the advanced technologies that make the 2015 F-150 the smartest truck that Ford has ever built.

It’s also gonna be awesome, and I for one can’t wait.