Rather Than Tickets, Texas Officers Give Stricken Family Car Seats 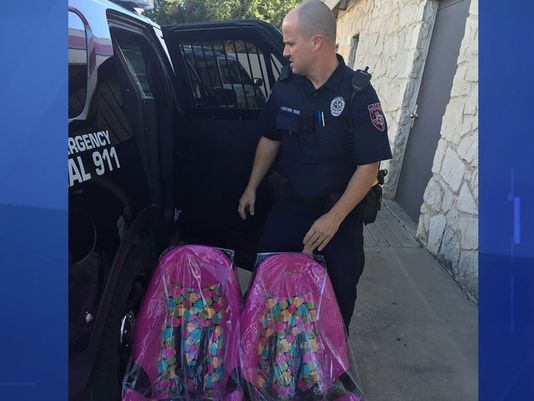 In today’s daily dose of warm fuzzies, two police officers from Cedar Park, Texas, have gone above and beyond to help out a man and his family.

On October 17th, Officer Justin Gower pulled over a truck that had an expired registration and a malfunctioning taillight. Normally both of those would be ticketable offenses, and when Gower came to the window to speak to the driver, he realized that the driver had three little girls in the back seat without any car seats.

Gower realized that he had heard about this man from other officers. “[I] remember hearing the story about, you know, he’s saving money, he’s living in a car, he’s trying to get his family down,” Gower said to KVUE. So, Gower called in Officer Cale Hawkins, who had spoken to the man a few weeks prior.

Together, the officers decided that giving the man three traffic tickets wasn’t going to do any good. Instead, the officers pooled their money, and while Gower talked to the driver, Hawkins drove to Wal-Mart, where he bought three car seats for the girls.

According to Hawkins, the manager at Wal-Mart even gave them a small discount, after learning what the officers were doing. Hawkins took them back to Gower and the truck, and they helped the man install the three seats.

Showing that the Cedar Park officers all have big hearts, when the other officers on the same shift heard what Hawkins and Gower were doing, they pitched in as well.

While the man didn’t want to speak on camera, he released a short statement:

“It was nothing short of a miracle. It was something that was really needed. The officers have been a blessing.”