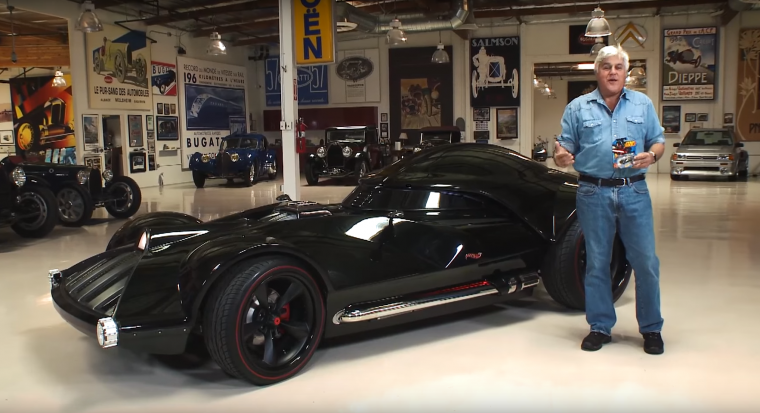 Jay Leno endorses the power of the Dark Side. What else is new?

If you are one of those people who will always think of Jay Leno as late night television’s greatest villain, prepare to seethe with righteous anger as you watch this gif, in which Leno laughs maniacally while driving the Hot Wheels Darth Vader Car.

If “Jay Leno’s Garage” could have afforded the rights to “The Imperial March,” it would have been the most appropriate background music for Leno’s driving since somebody altered his Tonight Show promo by adding Radiohead’s “Creep.”

Whatever your thoughts on Leno, though, the one-of-a-kind Darth Vader Car that Mattel built to promote its Star Wars Hot Wheels lineup is undeniably cool.  It has a helmet-like design, lightsaber-inspired side pipes, Imperial-badged seats and wheels, Vader breathing sound effects, and like Ford’s original Model T, it can be had in any color you want, as long as you want black (and why wouldn’t you?)

Hot Wheels Senior Staff Designer Bryan Benedict says the Darth Vader Car is one of the toy company’s cars that are meant to be “vehicular expressions of popular characters.” Benedict says for this model, he tried to capture Vader’s personality during the design process by focusing on keywords like “powerful, “menacing,” “strong,” and “performance.”

Those adjectives are certainly present in the design, as well as the actual build of the vehicle, which is based on a C6 Corvette chassis and equipped with a 526-horsepower LS3 V8 engine. As car builder Billy Hammon explains, it’s essentially a “rebodied Corvette, but heavily modified.”