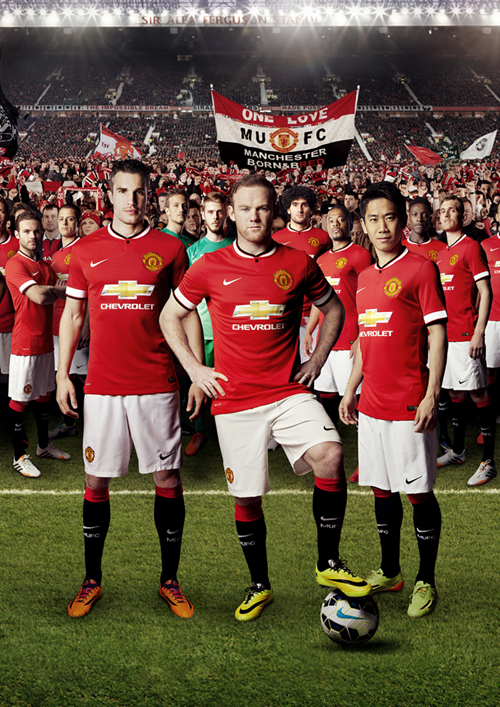 Man U in the new shirts ©GM

In case you were not cool enough to tune into the Manchester United vs. Real Madrid match, Man U kicked Madrid’s butt 3 -1. Even more exciting for those who enjoy soccer—or football, sorry—the match drew the largest crowd in American soccer history, likely because of the buzz stirred by the recent World Cup. In total, 109,318 screaming fans attended the Manchester United vs. Real Madrid match during this past Saturday’s installment of the Guinness International Champions Cup, played at the “Big House” stadium in Ann Arbor, Michigan, as part of Chevy’s $559 million shirt sponsorship deal with Man U.

Not only did nearly 110,000 fans actually attend the game, but record numbers of fans across the world tuned into to watch on TV or via livestream.

The match was actually a close call for a bit. Man U’s Ashley Young scored in the 21st minute, but it was quickly responded to with a goal from Real Madrid’s Gareth Bale, who scored in a penalty shot six minutes later. From there, however, Man U took the lead, with Young scoring in the 37th minute and Shinji Kagawa crossing the ball for Javier Henandez to head the third and final point in.

A victory in such a big game is an early sign that Chevy made a good move by inking a deal with Manchester United. Here’s hoping for more victories in the matches to come.