Don’t get us wrong; the vehicles displayed at the Specialty Equipment Market Association (SEMA) Show held in Las Vegas every year are awesome, but there is something slightly depressing about knowing that no matter how much we want to drive any number of customized vehicles displayed, like the refreshed 2014 Honda Civic Coupe, we never will. 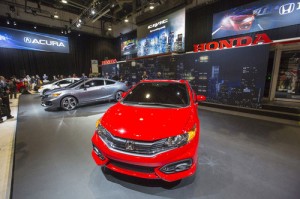 Enter Honda to raise our spirits.  Just like every automaker, Honda displayed some tricked out, one-of-a-kind vehicles, but they also gave us our first look at the refreshed 2014 Honda Civic Coupe and Si models, which are vehicles anyone can drive.

The Civic Coupe flaunts a redesigned front fascia that delivers a bolder stance and more distinct curb appeal.  The Civic Si boast an enhanced 2.4-liter i-VTEC engine with upgraded exhaust system that bolsters performance figures to 205 horsepower (from 201) and 174 lb.-ft. of torque (from 170).

“With the further advancement of the 2014 Civic Coupe and Si models and an exciting path forward for performance parts drawing on our racing experience we are making a statement about our commitment to the fun to drive character of the Honda brand”, said John Mendel, executive vice president auto sales for American Honda, in a press release.

Which do you prefer; the refreshed 2014 Honda Civic Coupe or Si?