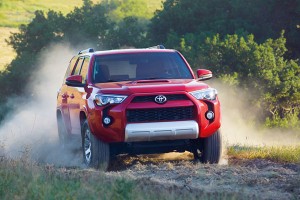 Toyota’s 4Runner has always been an SUV built for adventurers. It’s ready and eager to accompany you on any trip—whether it be on the road or off, it makes no difference—and to make you look and feel good doing it. “We’re all born wild,” Toyota’s website says. “The trick is staying that way. 4Runner remains a ferocious beast of a body-on-frame. The perfect companion for those brave enough to keep it wild.”

The 2014 4Runner features a redesigned front end—updating the 4Runner’s classic, easily recognizable look for the next generation of drivers. Its body-on-frame construction—4Runner remains one of the last SUVs to still be produced this way—helps the 4Runner maintain its toughness for off-road hazards and obstacles. The muscles are just as strong as the skeleton, however, as the 4Runner comes with a 4.0L V6 engine with 270 horsepower and can tow up to 4,700 lbs.

The 4Runner’s rugged exterior shields a comfortable, enhanced interior. With Entune and a backup rear vision camera, you’ll be snug, safe, and entertained on the inside, while your 4Runner churns over harsh miles of dirt on the outside.

Brought to you by Muller Toyota in Flemington, NJ