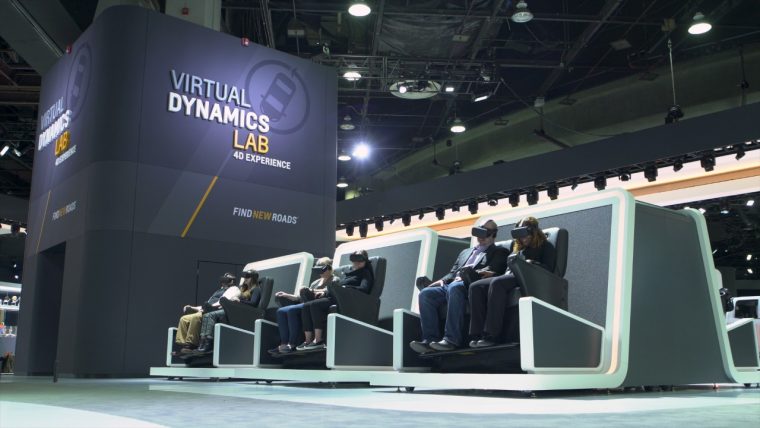 Prior to this year’s North American International Auto Show, Chevrolet announced a new virtual reality interactive exhibit that would make its way to Detroit. Called the Chevrolet Virtual Dynamics Lab 4-D Experience, the virtual reality (VR) system puts you in the passenger’s seat of a Chevrolet Camaro as it drives through various terrains.

As we reported in January, Chevrolet designed the experience to show customers an up-close-and-personal look at the testing systems that Chevrolet puts its vehicles through. From rocky terrain to sudden temperature drops, they test several different elements and the virtual reality system takes you along for the ride.

The News Wheel was fortunate to attend the 2018 Chicago Auto Show press preview last week. While we were there, I sat down to experience the Virtual Dynamics Lab 4-D experience with one of my colleagues. After signing several waivers, we were ushered over to our seats; the seats weren’t exactly designed to look like the seats you’d find inside of a car, simply because the VR system puts you in the passenger’s seat of several different Chevy vehicles, all of which would have different interior styling. We were given basic instructions before they put the VR goggles on and began the simulation.

For me, the most fun vehicle to “ride in” was the Camaro. In the virtual reality world, you sit in the Camaro’s passenger’s seat while a race car driver, sitting fully uniformed in the seat next to you, takes you around on a high-speed track. The seats you are in are programmed to move based on the simulation, so you really feel like you are inside the vehicle when it brakes, accelerates, or turns. The simulation even blows gusts of wind toward you when the driver accelerates.

While the graphics for the simulation weren’t the best we’d seen, I found the Chevrolet Virtual Dynamics Lab 4-D experience to be, by far, the most immersive system at the show. Other systems were simply sitting in a simulator staring at a screen, while this one gave you a 360-degree, four-dimensional experience. You truly felt like you were in the car, feeling the cool air blowing on your face during temperature drops and smelling chlorine as the vehicle underwent water tests. They even had a brief scare as you drove through the desert, with “rattlesnakes” rushing past your feet (not cool, Chevy; but kind of funny).

As someone who doesn’t play a lot of video games, I struggled with many of the hands-on driving simulations. Luckily, with Chevrolet’s 4-D experience, I didn’t have to stress about controlling the vehicle; since I was a “passenger,” I just got to enjoy the ride. Others might prefer to be behind the wheel, but I would argue that it was refreshing to experience one of these driving simulations without the added stress.

Vehicle Spotlight: Travel with the whole family in the 2018 Chevrolet Traverse