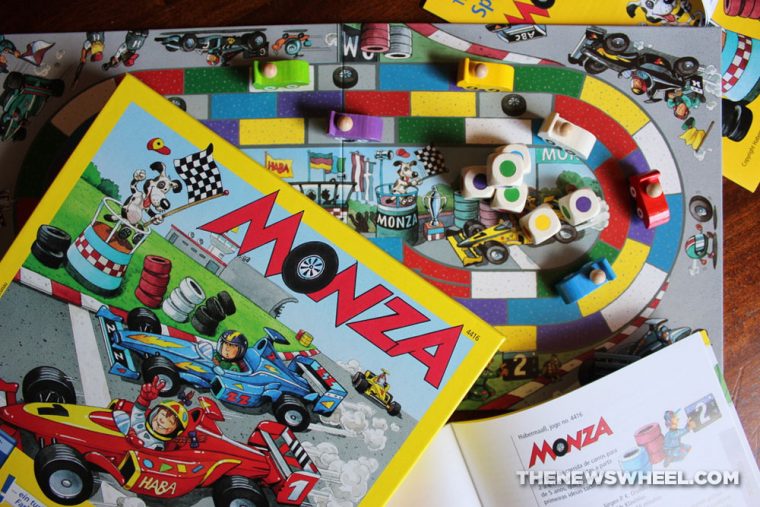 Even though a person needs to be a teenager before they’re old enough to drive a car, that doesn’t mean younger children aren’t fascinated by automobiles and car racing. Unfortunately, many game makers dismiss this, resulting in very few car racing games on the market aimed at elementary or preschool-aged children.

HABA, creator of many children’s games and toys, is working to fill that shortage, releasing a number of high-quality racing games over the past years.

If you’re looking for a clever but simple children’s game that uses the color recognition of Candyland but with added movement strategy–and without indoctrinating your kids into a sugar addiction–Monza is the game for you. It takes its name from the Italian city known for its Formula One Grand Prix racing circuit, as reflected by the open wheel single-seat race cars depicted on the game’s box.

Did You Know? Discover the differences between Formula One and IndyCar racing 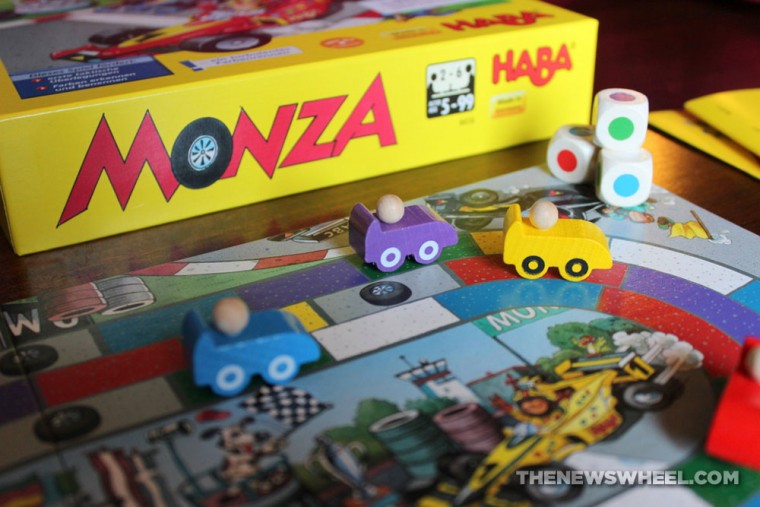 In Monza, players roll six dice of varying colors to move their race car tokens along a circular, three-lane track.

Participants begin by choosing a colored race car and placing it at the starting line. The youngest player begins, rolling all six dice and using the resulting colors shown to move forward. Each die can be used once to move to the corresponding colored square directly ahead, in any chosen order. Cars can change lanes while moving forward, especially to avoid obstacle spaces (tires). 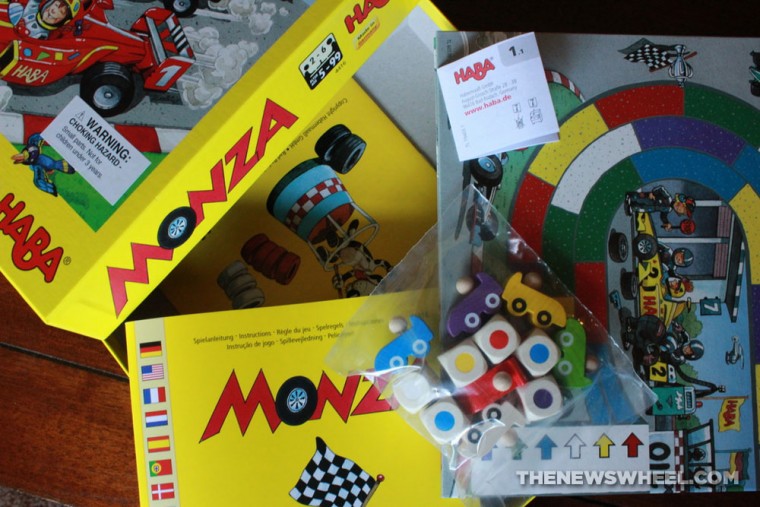 Monza is packaged in a small box that won’t take up much space on a shelf but still stands out in its yellow packaging and bright red title. After opening the shrink-wrapped box and removing the small components from their sealed plastic bag, the pieces will be loose in the box but can easily be gathered up afterward in a zip-seal baggie.

The art on the box and gameboard is detailed and colorful, with items and vehicles depicted in energetic motion. This–and the presence of dogs and children in the illustrations–is sure to catch the attention of young children. Clearly, the designers know its target audience.

All of the components in Monza are well-crafted and worth the cost. The wooden car tokens were especially attractive and easy-to-use. Even higher-end adult racing games don’t have vehicle tokens of such caliber! The race track board laid flat and folded with ease, without feeling like it would tear anytime soon. Spaces on the board are perfectly placed and easy to differentiate from each other. Even the speckled coloring on the spaces gave an added texture for theme appeal.

One drawback we ran into was that the white dot on the die blended into the white background, confusing some younger players who thought a dot was missing. It might be helpful for parents to draw a circle in pen around the outside of the white circle to clearly define it. 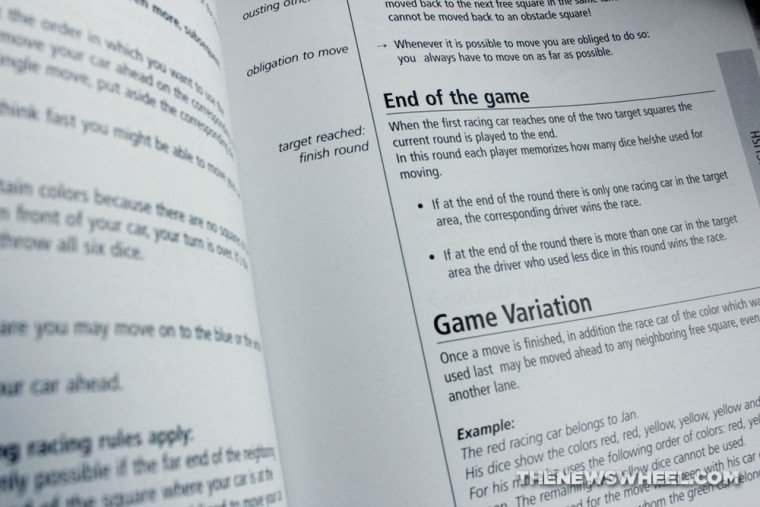 Monza is intended to be learnt by players of all ages through its simple mechanics, but due to the text-heavy instructions included, adults will have to read first before teaching young players.

As an adult, comprehending the rules wasn’t problematic. Each language (German, English, and others) has three pages in the instruction booklet dedicated to explaining the gameplay. Some of the translation may take a couple readings to understand, but the sidebar highlights calling out the main points is very helpful for a quick refresher or early readers. Overall, the directions keep things short and simple, ready to get right to playing.

Teaching our young play-testers was a breeze, as they immediately understood the connection between the colored dice faces and spaces. Lane change movement was a bit tricky to teach at first, but eventually they caught on.

Story Time: Here’s a great board book about cars to read with your child 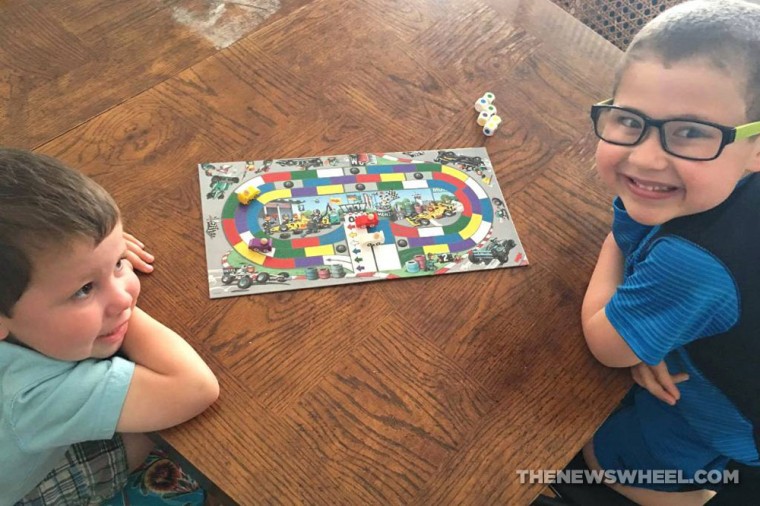 Our young play-testers give Monza a spin

We tested Monza both as adults and with young children. In both cases, the game was a lot of fun. Granted, Monza is intended to be a children’s game rather than a family game, but it has the feel of a classic board game that anyone would have grown up playing. Each game lasts a single lap and, based on the number of players participating, takes a short time that never gets to the point of dragging. 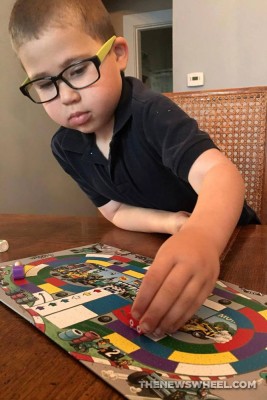 Monza was a big hit for its simple, developmental strategizing

Our group all loved the idea of choosing the sequence of dice to use in order to determine board movement. It’s a great balance of luck and strategy, deciding how you’ll use the colors you roll. Having so many dice and colors means that token movement is only limited by the player’s planning, which gives young ones motivation to think before they move.  In that way, many movement options give the player control and possibilities on every turn, rather than waiting for a the “right” one to pop up every time.

If there’s a significant age gap between players, the older ones will have to hold back and go easy on younger, less-experienced ones, since they’ll naturally be able to think multiple steps ahead. But, that doesn’t make Monza a tough game to master. In fact, we found that those younger than the suggested 5 years of age could even learn Monza fairly easily.

It’s not a stretch to say that Monza has the makings of a modern classic in children’s gaming. As a fantastic entry into racing games, it has dice-movement mechanics that will appeal to a range of ages and possesses a vibrant, energetic racing theme absent from the majority of children’s games.

Monza is available for purchase through Amazon, Miniature Market, the publisher’s website, and other online retailers.

Product provided for review by publisher