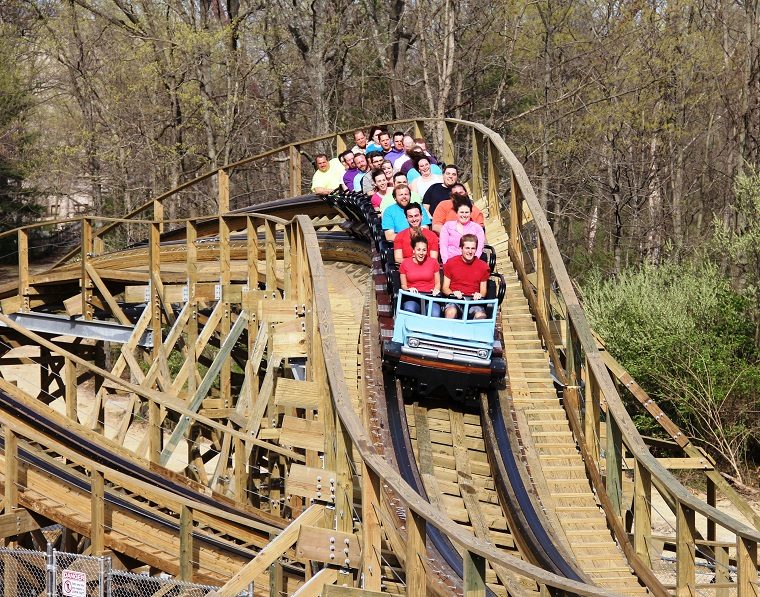 Without a doubt, one of the most anticipated new roller coasters for 2017 is Mystic Timbers at Kings Island. Traffic leading into the Ohio amusement park was backed up all the way to the highway on its opening day, with many visitors excited to take a first ride on the park’s newest coaster.

Part of that anticipation was probably due to the extensive marketing campaign leading up to the ride’s release. Kings Island asked coaster fanatics to guess “What’s in the Shed?”, alluding to a mysterious finale guests would experience before the coaster returned to the station.

Fortunately, I was able to avoid opening day crowds by attending a special press event prior to the ride’s official debut. So, does the 16th coaster for Kings Island and the shed at the end of it live up to the hype? Let’s take a look and explore Mystic Timbers. 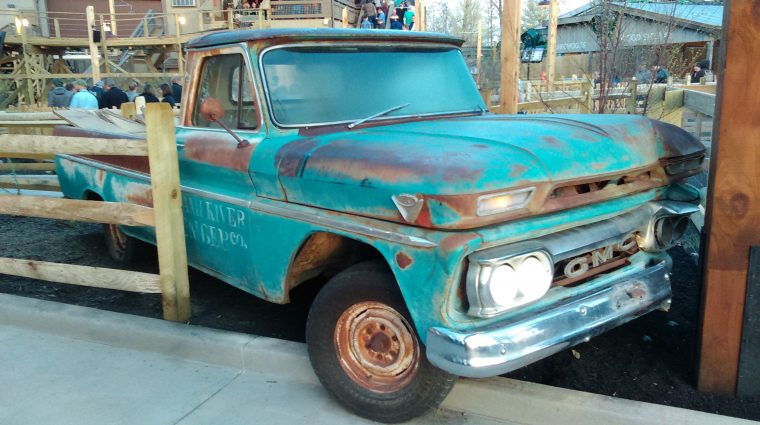 When Kings Island started making plans for Mystic Timbers, the staff wanted to do more than just install of fourth wooden roller coaster for the park. They wanted to create an experience that was rich with theming and storytelling.

As such, they turned to Holovis, a British company that specializes in themed experiences and virtual technology. Holovis not only created the theming for the ride, but also developed the story for Mystic Timbers, which involves a local lumber company that was abandoned over 30 years ago due to an unknown force.

The ride is full of little details that prove that Holovis did its homework when developing the story and theming for the coaster. For example, while you’re entering the shed, you can hear ’80s classics on the radio, such as “Total Eclipse of the Heart” by Bonnie Tyler and “Maneater” by Hall & Oates.

It would have been easy enough to randomly choose popular hits from that era. However, the team at Holovis made sure that all of the songs that play on the radio were released prior to April 15, 1983, the date when the Miami River Lumber Co. shut down, according to the ride’s own backstory.

Even the classic Chevrolet/GMC truck that inspired the design of the ride vehicles was strategically chosen. According to Amy Steele, vice president of development at Holovis, “We wanted something that reflected that classic American retro feel. The ride is stuck in time.”

When the teams from Holovis and Kings Island spoke about developing the story for the ride during the press event, you could tell that this was a passionate project for them. That passion can be observed and admired in the intricate details sprinkled throughout Mystic Timbers. 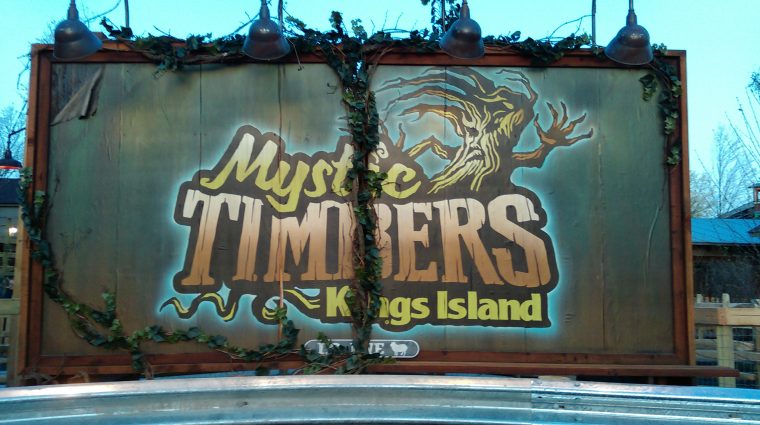 Mystic Timbers itself is a ride that only lasts around three minutes. As with all thrill rides, most of your time will be spent waiting in a line.

Theme parks like Walt Disney World, Sea World, and Universal Studios are famous for having interactive queues to help guests pass the time, while lines at Kings Island are usually lacking in those distractions. However, with Mystic Timbers, Kings Island evidently wanted to focus a lot more on theming, and as a result, there are nice little touches outside of the ride and inside its queue that match its story.

As I previously reported, an old Chevrolet C-10/GMC 1000 Series truck is parked, or rather crashed, right outside of the ride’s entrance. The vehicle itself is an unofficial symbol for the ride, serving as the inspiration for the coaster vehicles and even appearing on the merchandise.

Meanwhile, recordings echo outside of the ride and inside of the queue, warning guests that the area is closed off to the public. Scattered throughout the queue are various television screens that show security footage of the surrounding area.

Overall, the theming in the queue doesn’t exactly craft a story of its own unlike with some attractions. However, next to Flight of Fear and the Beast, it’s easily the most heavily-themed ride line at Kings Island. 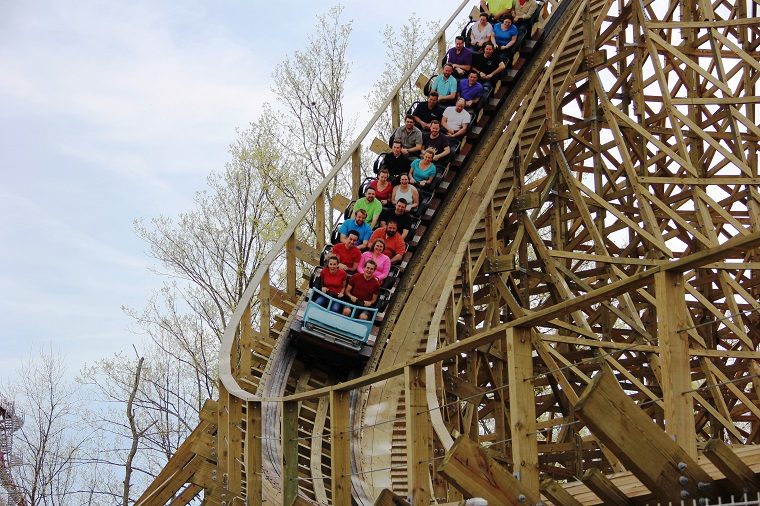 With Mystic Timbers entering Kings Island as the park’s fourth wooden roller coaster, the Ohio amusement attraction now has 18,804 feet of wooden-coaster track, the most of any amusement or theme park in the world. With wooden coasters making something of a comeback thanks to companies like Great Coaster International and Rocky Mountain Construction, how does Mystic Timbers stack up?

The ride has a grand total of 16 airtime hills, and you can really feel them while on board. However, thanks to the ride being smoother than most wooden coasters, the airtime jumps never leave you with an uncomfortable feeling.

As great as the airtime was to experience, I was more impressed any time the coaster was banking. If you want to experience the most force from both the hills and the banks, then the back row, left seat is your best friend.

Nevertheless, after riding Mystic Timbers multiple times, I felt like it was lacking a “wow” moment that most coasters have. There was no equivalent to passing through the keyholes on Cedar Point’s GateKeeper or sliding down backwards on Disney’s Expedition Everest.

I suppose the much-discussed shed was supposed to be the coaster’s big moment. And speaking of the shed… 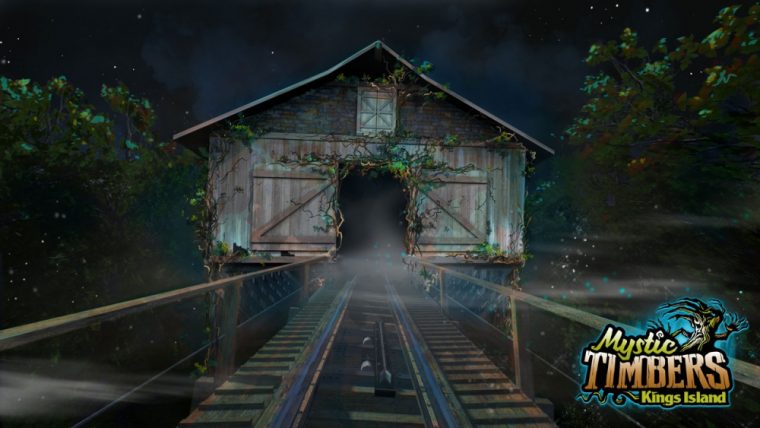 For the sake of the mystery that Kings Island is trying to build up for the ride’s finale, I will refrain from spoiling the surprise of the shed. However, if you were expecting a drop track or some other thrilling element, I can inform you that you will probably walk away from Mystic Timbers slightly disappointed.

Too much hype can sometimes fail to meet expectations, and I worry that this might be the effect for Mystic Timbers and “the shed.” Coaster enthusiasts probably would have been enthralled enough by the prospect of 16 airtime hills without the additional promise of something amazing in the shed. Now many are walking away with a sour taste in their mouths after building up their expectations so high.

In defense of the shed, it is full of that rich theming and attention to detail Kings Island was striving toward when crafting Mystic Timbers. It even has some subtle references to other coasters in the park.

Without giving too much away, I can tell you that there are multiple experiences in the shed. In this way, you could ride Mystic Timbers multiple times and experience a different ending each time.

When I rode Mystic Timbers, things did uncharacteristically crawl to a stop once riders entered the shed, so I could see this causing capacity issues for the ride in the near future. Furthermore, depending where you sit on the ride, you can get robbed out of some of the shed’s spectacle. Riders in both the front and the back don’t receive a very good view of the finale, somewhat ruining the effect.

In the end, the shed is in no way bad. However, it really needed to be great to justify all of the anticipation that was built up for it. 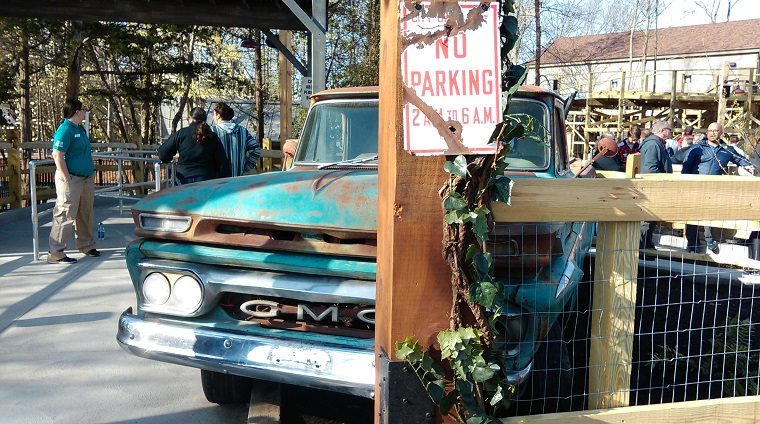 Mystic Timbers rests on a nice sweet spot, delivering the airtime and thrills that coaster enthusiasts crave while still being approachable for younger riders. In this way, it is arguably an ideal investment for Kings Island.

Furthermore, any move toward more theming and storytelling in coasters should be applauded, especially when so much work went into it. When it comes down to it, Mystic Timbers is a ride that I admire more for what it strove to be than for what it turned out to be.

By no means is it a bad coaster. However, I don’t anticipate it being many people’s favorite ride. Despite not living up to the incredible hype that it built up for itself, Mystic Timbers remains one of the most enjoyable coasters currently  at Kings Island.