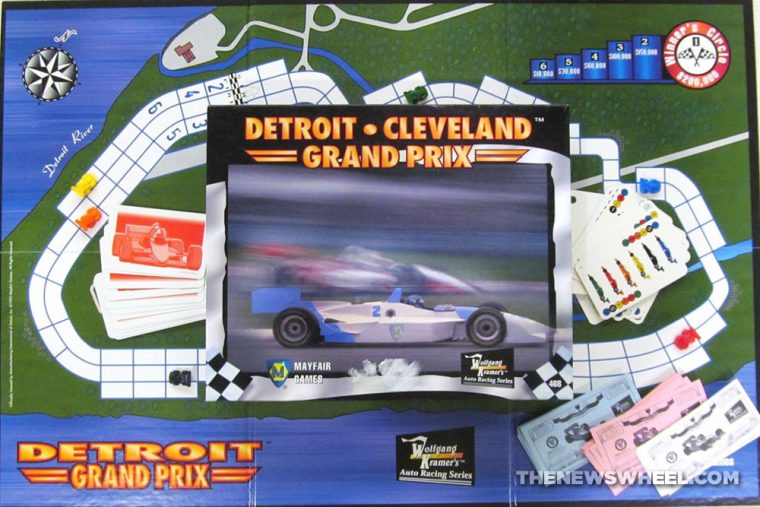 The market is full of automotive racing board games, but few are as distinguished as Wolfgang Kramer’s Auto Racing Series. A collection of titles that utilize similar core game features, the series includes 1990’s NASCAR Daytona 500, which I already reviewed.

In the year that Mayfair Games first introduced the United States to Settlers of Catan, the publisher also released another game that–while overshadowed–has earned the love of many fans of racing board games: Detroit/Cleveland Grand Prix. Kramer utilized his signature auction-and-movement system on a double-sided board to create a classic racing game that’s still fun today.

Looking for an Involved Stock Car Racing Game? Check out our review of Thunder Alley 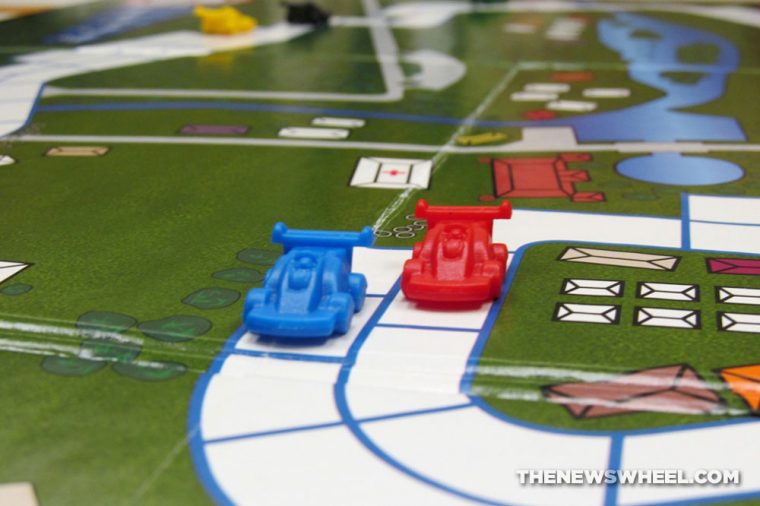 Winning Detroit/Cleveland Grand Prix isn’t just about having a winning car–it’s about finishing with the most money. 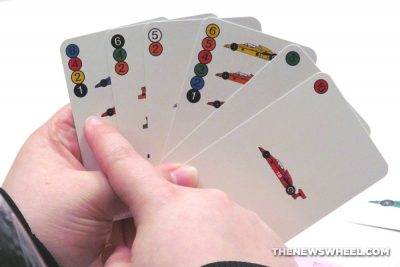 Rather than beginning the game with each player picking their preferred car color, the deck of movement cards are divvied out among players, along with some cash. Then, each color car is put up for auction and players bid for ownership of that vehicle for the race; the more movement cards that you possess featuring a certain color, the more you’d want to win the bidding on that car.

Once the auction concludes, cars are placed on the track and the second half of the round commences: the race. Following certain parameters, competitors take turns playing movement cards from their hands and moving the cars along the racetrack accordingly. Most cards feature multiple colored cars that should be moved in sequence to different distances.

Play continues until all cars cross the finish line or all possible cards are played. Car owners are given cash prizes depending on finishing rank. Then, cards are collected, cars are removed from the board, and the auction begins again. The game is played for three full rounds. 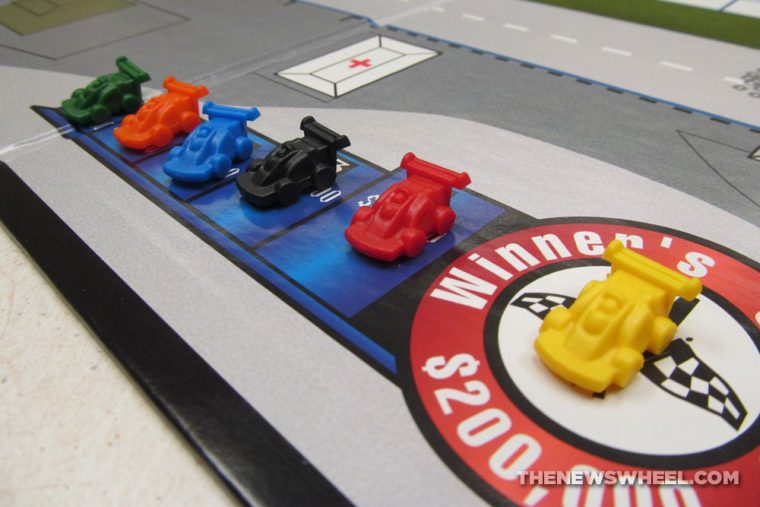 All the components of the game are quality-made, especially considering the low retail price. The brightly colored plastic race cars are particularly delightful and fit perfectly on the track spaces. The cards can be dealt and shuffled repeatedly without bending. There’s a lot of empty space in the plastic box insert that won’t be filled by components, though; it’s simply a catch-all design meant for use in many different games.

The board itself is thick, durable, and folds neatly without coercion. The artwork on it might look a bit too simplistic and “cartoony” for some players who’d prefer a design more realistic, but its overall layout is neatly drawn and easy to comprehend. 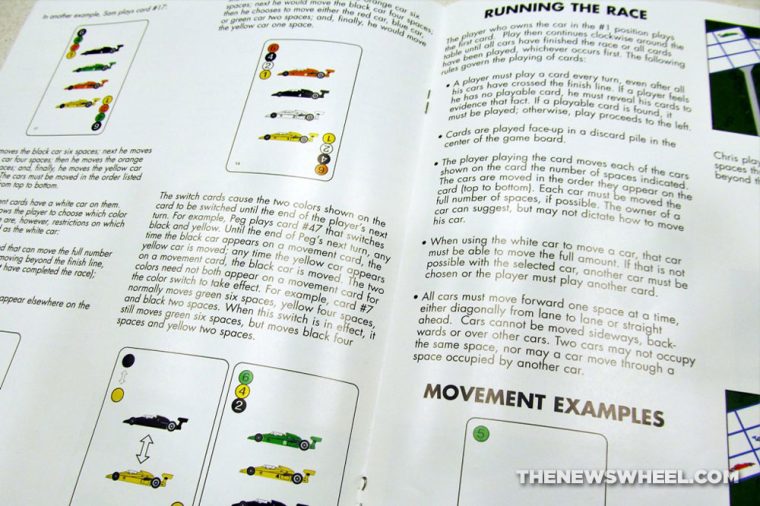 To teach Detroit/Cleveland Grand Prix to your fellow players, you’ll want to read through the directions first, but at merely 6 pages of basic text and interspersed images, it won’t take long to master. In fact, the basic gameplay is relatively simple and easy to teach; the directions go out of their way to provide guidelines on many questions and scenarios that could arise. It’s certainly a useful rulebook that provides the guidance it should.

It even offers multiple ideas for varying the rules and changing up the experience. 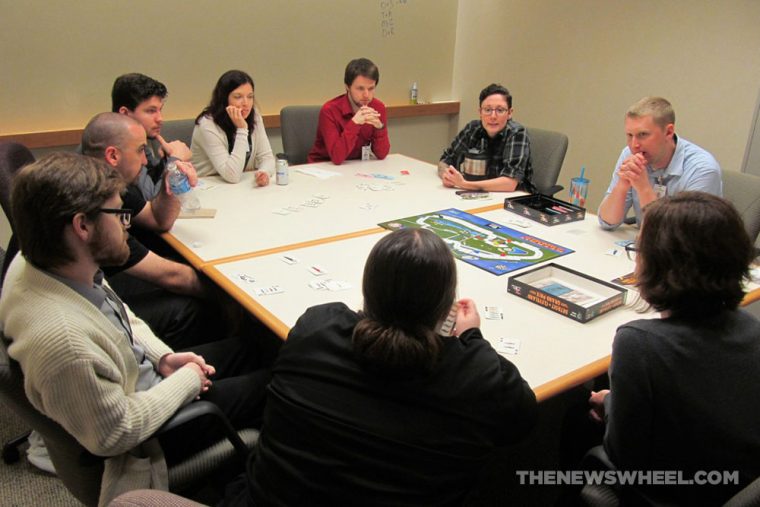 Having already played and as a fan of Kramer’s Daytona 500, I had high hopes for how its mechanics would be re-implemented in Detroit/Cleveland Grand Prix. While there are some minor differences between the two–such as the lack of drafting movement in this version–the aspects I liked of Daytona 500 are still present here: the tension of vying for your preferred car, the competitive thrill of playing your cards at the right time, and the ease of introducing new players to the game. 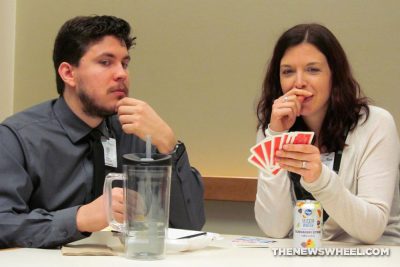 What makes Detroit/Cleveland Grand Prix–and Kramer’s Auto Racing Series successful–is that it’s not simply moving your car along the racetrack; it’s about careful planning and forethought, timing your actions, and knowing when to play yours cards to maximize their benefit to you while moving to hinder others. That’s what makes it a fun, inclusive game that even non-automotive fans will enjoy.

Detroit/Cleveland Grand Prix’s double-sided board offers some variety, allowing players to choose between a shorter or a longer track, each featuring multiple bottleneck curves for plenty of ruthless blocking. While it’s not a flawless game–the initial bidding typically doesn’t go as high as it’s designed to–it’s a fun experience regardless that isn’t over-complicated like many other racing games.

If you’re looking for a simple-to-teach but rewarding and competitive auto-racing board game for your library, Detroit/Cleveland Grand Prix is a solid title that still holds up 20 years later.

Detroit/Cleveland Grand Prix can be purchased through Amazon