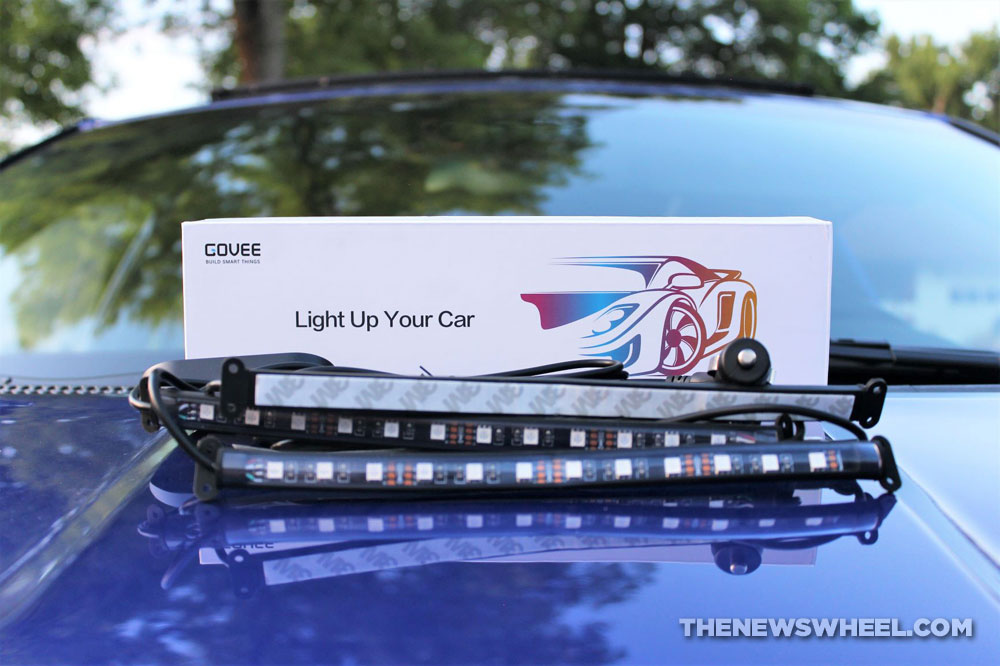 When I was a teenager, I often saw other people’s cars tricked out with cool accessories that lit them up like glow sticks at night. I wished I could have a car that looked like theirs, but I realized that it took a lot of money and effort to install lights like those.

If you’ve ever shared that dream with me, you’ll be just as thrilled as I was with Govee car interior lights. Unlike many cabin mood lighting products, these LED Strip Lights are easy to install, simple to operate, and won’t empty your wallet. Here’s why I think Govee LED lights are a bright idea.

Pricey but Popular: Are Weathertech mats really that good? 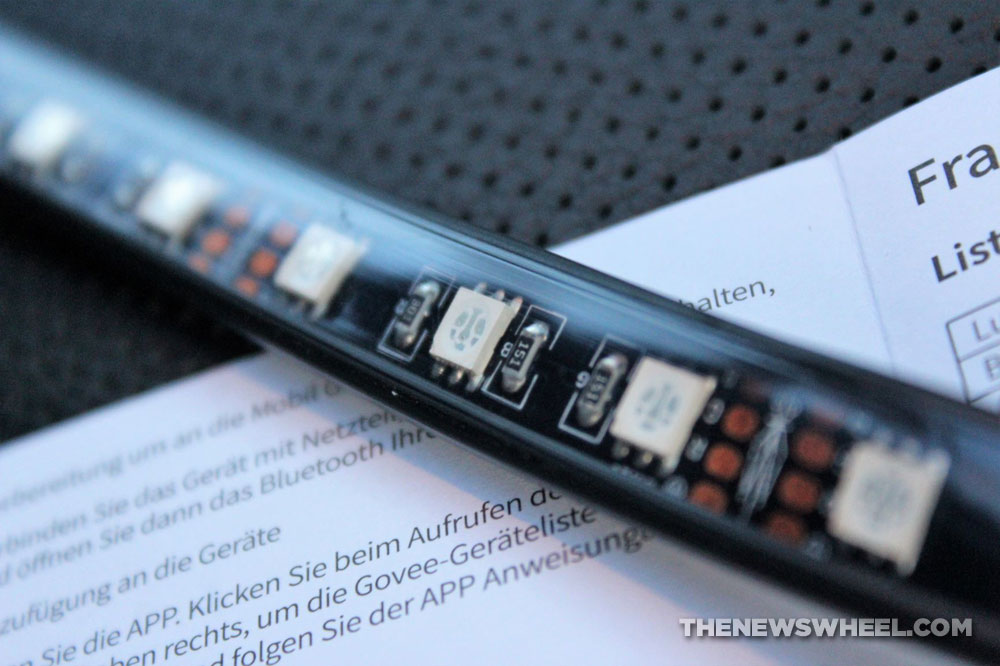 Unlike most mood lighting accessories that require you to wire the front and back or left and right separately, Govee LED light sets can illuminate all four seats with a single unit. It consists of four PVC rubber strips — each with 12 LED bulbs — connected by a wishbone-shaped cord that originates from a DC 12V outlet. The RGB lights can be tweaked to create millions of distinct hues.

You can operate the lights in two ways: either the remote that’s connected to the LED strip or an app Govee offers. The controller allows you to choose the color and brightness, and the app lets you customize which color and pattern combinations you want.

The coolest feature is a music-matching display system that monitors and adjusts the lights to the rhythm and tone of the music you’re playing through the speakers. It’s not like DJ lights that resemble a rave, and the adjustments aren’t instantaneous, but the steady cycling through of patterns is a nice alternate to the constant ambient lighting setting. 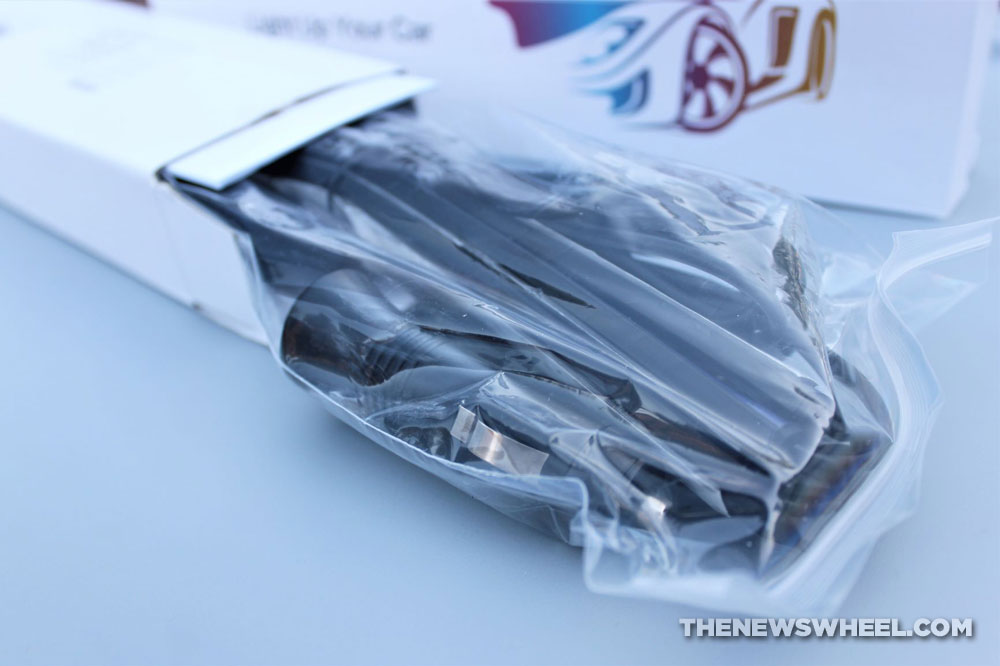 A set of Govee cabin lights comes in a plastic bag in a slim white box. The wires are easy to unravel due to being carefully packaged with twist-ties (so it doesn’t feel like you’re untangling Christmas lights). The box and the packaging are quite durable, so you shouldn’t have to worry about it being damaged in the mail.

The cords are thick and firm, and they stood up to the yanking and stomping tests I put them through. The LED segments are softer and were slightly bent from being in the box, so it took some time to flatten them out before they were straight enough to install.

The LED strips are waterproof and low-heat, and I verified both of these claims. Even after a night of using the lights and spilling a drink on them, they were safe to touch. 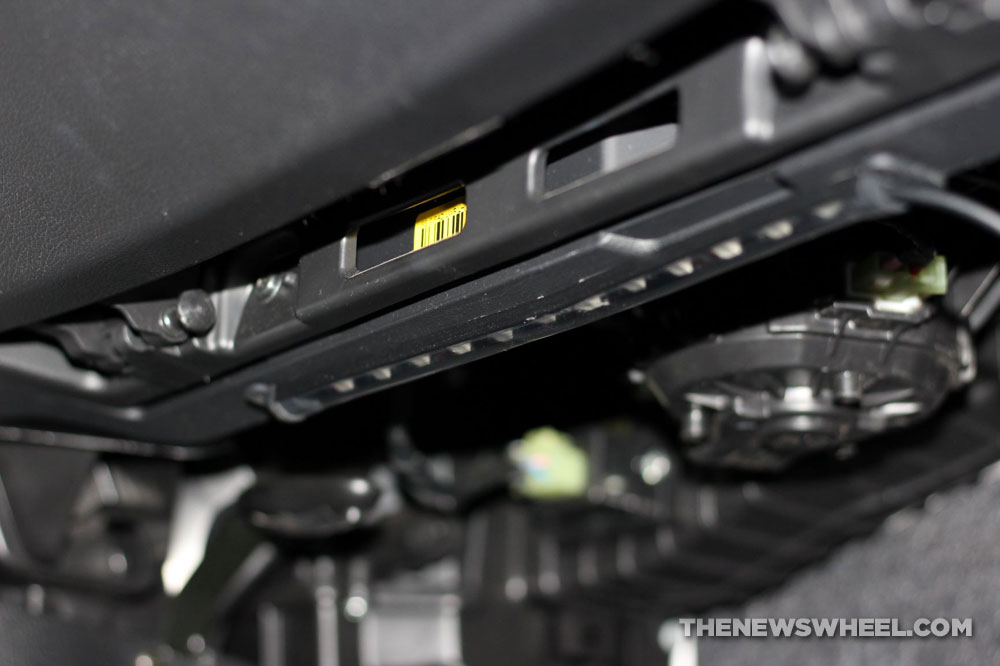 The Govee light set comes with a small pamphlet of step-by-step instructions in English, French, and German (no Spanish, unfortunately). It describes the five steps for installation.

After checking that the product works, you unravel it and lay out the cords throughout the cabin following the diagram provided: through the center console, then split across the footwells of the back seats, and up along each door to the undersides of the dashboard. This allows you to cover the whole cabin with one light set. After you decide where to put the lights, you clean off the spots and use the 3M adhesive tape to stick the LED strips in place. 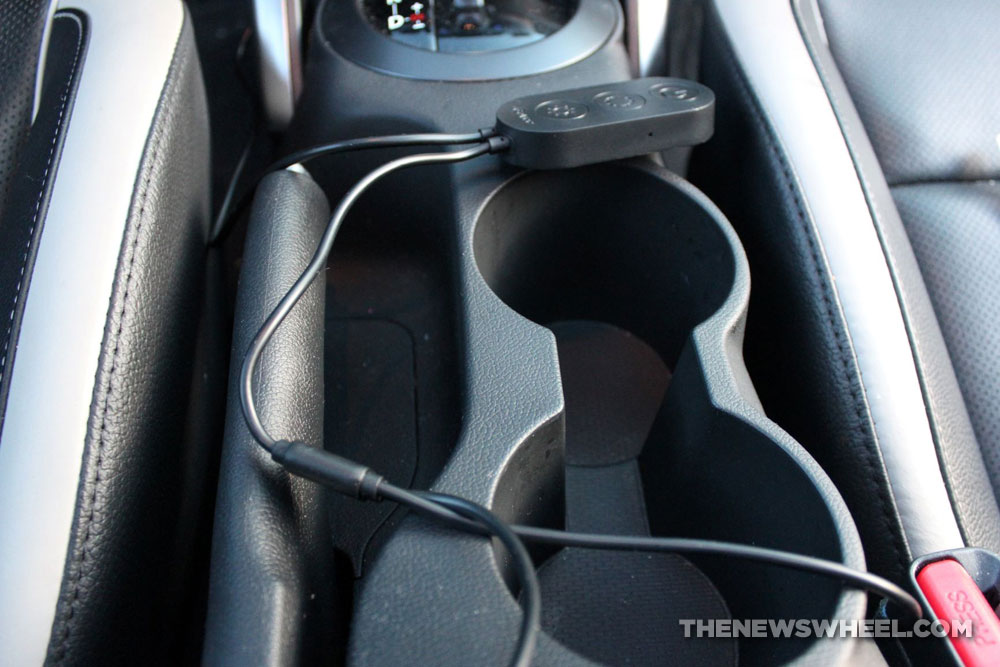 Govee also includes two other supplementary methods of securing the strips: wire ties and screws. From my experience, the 3M tape didn’t last more than a couple weeks in my car when parked in the hot sun in the middle of summer, so I’d recommend employing all three methods for long-term results.

Swag for Your Feet: Improve your driving wardrobe with these eye-catching racing shoes 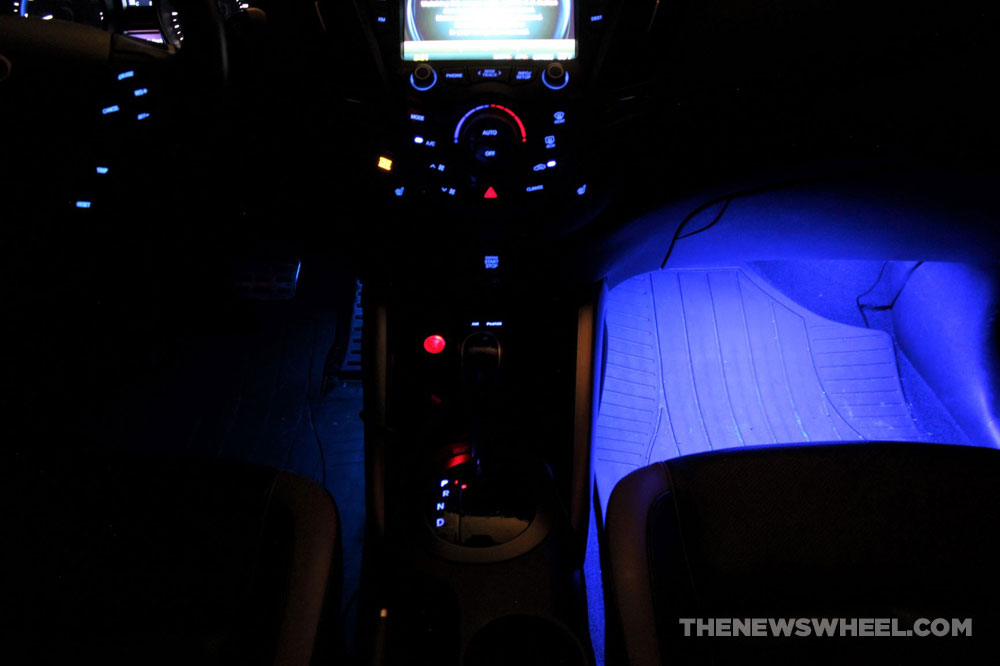 Overall Assessment: Does It Do What It Claims?

Full disclosure: I liked these lights a lot more than I thought I would. The quality, brightness, and ease of use are surprisingly high considering how low the price is.

Once you install the lights, they’re easy to use. The 12V plug has an on/off button on it, which lets you leave it plugged in indefinitely. That’s great, because the plug is a bit big and can take some forceful pushing to fit into the outlet.

For reference, I drive a Hyundai Veloster. It comes with ambient lighting in the front footwells, so I was able to compare the brightness of the OEM lights to Govee lights. Clearly, as shown above, there’s no contest. The Govee lights give off a full, even, vivid glow that’s not too bright or distracting to the driver. 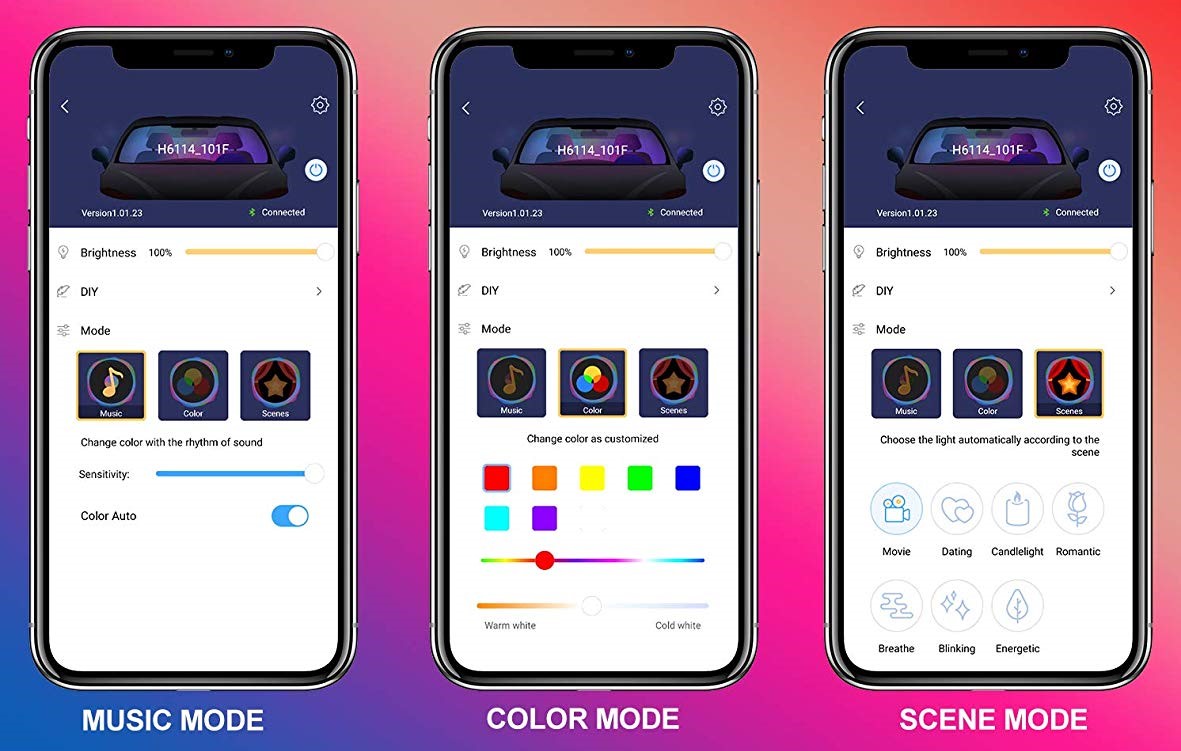 The app was easy to use and didn’t take much work to sync so I could start using it. I like the variety of ways you can customize the lights and even have some pre-programmed settings you can choose. The app sometimes took time to load or respond, but that may be because I have an older phone.

The cord length may be an issue in some vehicles. Being that my Veloster is a compact hatchback and the cord’s length didn’t give me much wiggle room when laying it out, I’m skeptical that it would be long enough to fit SUVs or trucks–though admittedly I didn’t check that. 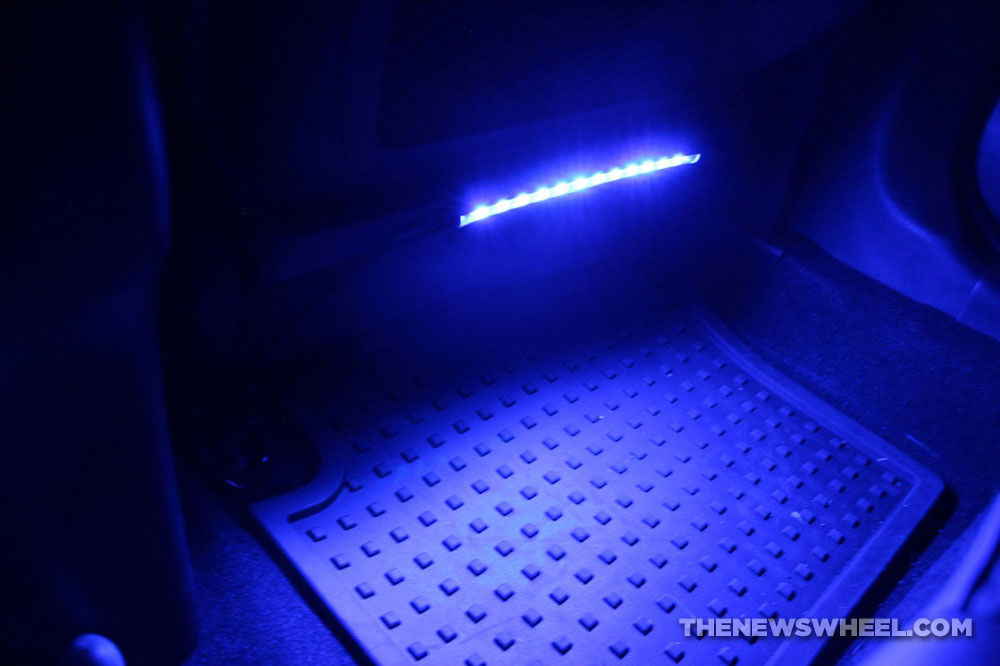 These Govee car interior lights are a great introduction to cabin mood lighting for anyone who’s wanted to try them out but aren’t sure where to start or if they would like them. This LED solution is affordable, easy to install without permanent damage, and give you a taste of color lighting solutions. If you end up loving the look of vibrant mood lighting in your car, you could choose to upgrade to a more high-end, permanent system. And if you don’t like them, you didn’t spend very much!

I, personally, liked these quite a bit and think they look fantastic in my sporty blue Veloster Turbo. I had been planning on only briefly installing the lights to test them for this review, but having seen them in action, they’re going to become a permanent fixture.