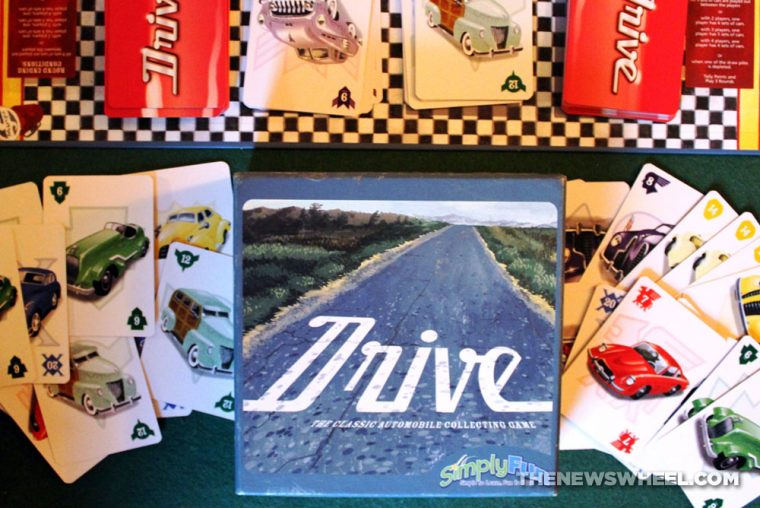 Tabletop gaming has become a massive market recently as tens of thousands of new titles are hitting the shelves each year. While many of these are highly-immersive strategy simulations that will empty your piggy bank, it’s nice to have a light card game on hand to pass the time. Drive aims to fit that niche.

Drive, designed by Michael Schacht (Zooloretto), was originally released as Crazy Chicken–as part of Ravensburger’s Fun for 2 series—and was later re-released as Call to Glory, with each enhancing the basic gameplay. 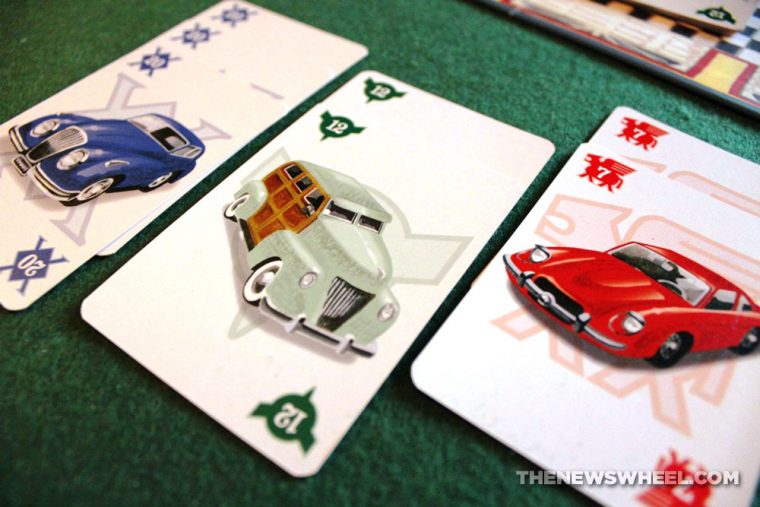 Shuffle the 110-card deck of classic cars; the deck consists of 9 types of classic cars with varying numbers on them (6 through 20). Deal three cards to each player. The remaining deck is split equally into two draw piles on the Garage Floor board. As the game progresses, there will also be two discard piles that accumulate on the board.

On each player’s turn, they must draw a card from two different piles–of the two draw and two discard stacks. Then, they may lay down a set of cards in front of them or discard 1 card to one of the discard piles.

To lay a set of cards, the player must have at least two of the same card (e.g. two 12s). That player may no longer add to or modify that set. For other players to play a set of the same type of card, they must lay a larger set (e.g. superseding a two-card set with a three-card set). If that happens, the smaller set must be discarded.

The game ends when all nine vehicle types are laid out, when a draw pile is empty, or when one player has a certain number of sets. Scores are tallied based on the numerical value printed on the cards (e.g. a set of 20s earns 20 total points). Multiple rounds can be played. 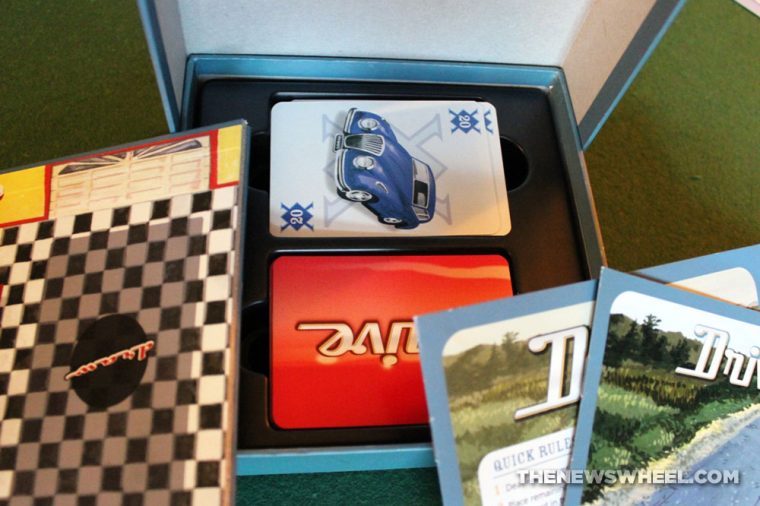 Drive comes in a compact, 6-inch by 6-inch shrink-wrapped box. Inside, the cards are also shrink-wrapped and stored in a plastic, two-trough tray so they don’t slide around. The playing board folds up and stores atop the plastic tray.

It’s a nicer box than you’d expect for a simple card game and is worth the extra money it might cost you. The durable linen finish on the box is far better than a weak slipcase, and the playing cards won’t fray or bend when shuffled.

The components themselves are classy and of very high-quality; my only qualms with them are aesthetic. More variety in the colors of cars on the cards would be helpful as some look deceptively similar (e.g. the 8 and 20). Second, the font choice of the “draw” and “discard” on the playing board are hard to read and look identical. Looser and rounder lettering would improve this.

The designs of the classic cars themselves were quite appealing and elegant, doing a fine job of paying homage to different antique models without using badges or brand names. 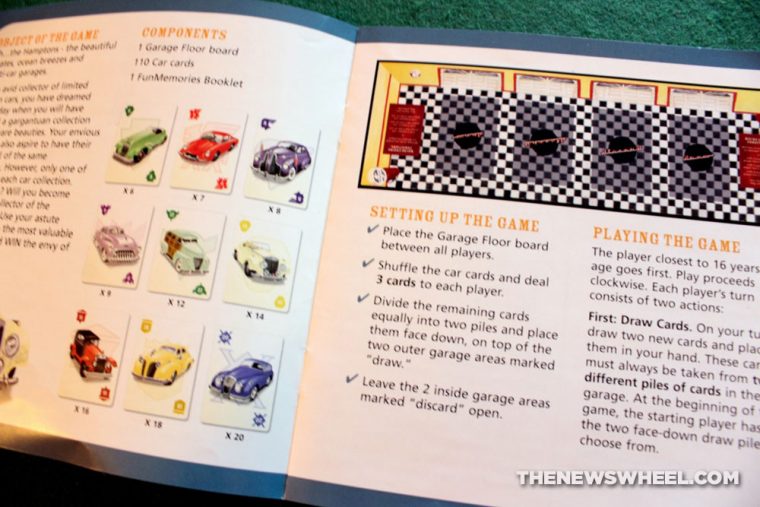 Drive‘s directions guide is not one you’ll have to commit to scrutinizing and memorizing hours before you play it. It’s a simple enough game with streamlined playing instructions that you can read through before you shuffle and deal the cards. The six-page leaflet includes examples, diagrams, bullet points, and even a “Quick Rules” page for refreshing.

It didn’t take me or my group long–less than five minutes–to start playing after I first cracked open the box. Drive benefits from its simplicity when it comes to teaching new players and non-gamers. This makes it a fitting game for parents to teach children and play together. 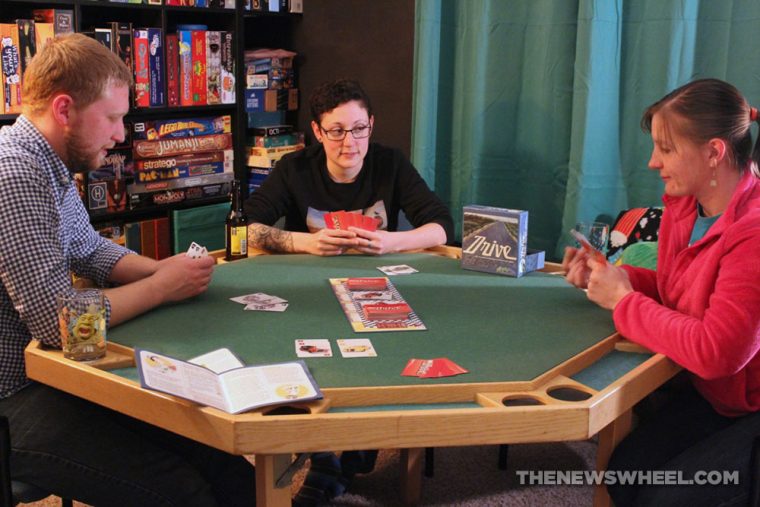 Since obtaining it, I’ve played Drive a total of six times, both with two and four total players, and despite its visual appeal and my fondness for set-collecting card games, it didn’t enthrall me. Each round lasted less than five minutes and was over before it really “got going.” 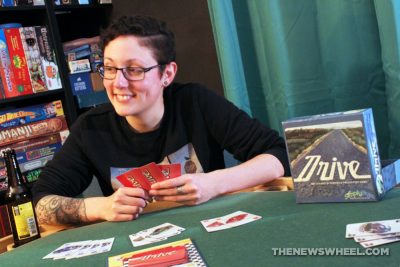 Drive plays best with two people as it takes longer to collect all 9 sets; when you play with three or four people, there are more cards in play and sets are made more quickly. We established a house rule that it takes 3 cards to lay down your first set when playing with four people, and that improved our experience.

In some cases, the cards were spread well and the game clicked, but mostly the outcome depended largely on how the cards were dealt, which didn’t feel very engaging.

If you like Rummy-style games that are easy to teach and a nice way to pass the time at the dinner table, you might want to consider Drive. It looks better than it plays, but isn’t by any means a bad experience. Bottom line–it looks like a Cadillac but performs like a Honda. I’d recommend Lost Cities or Jaipur over this if you’re looking for a two-player card game.