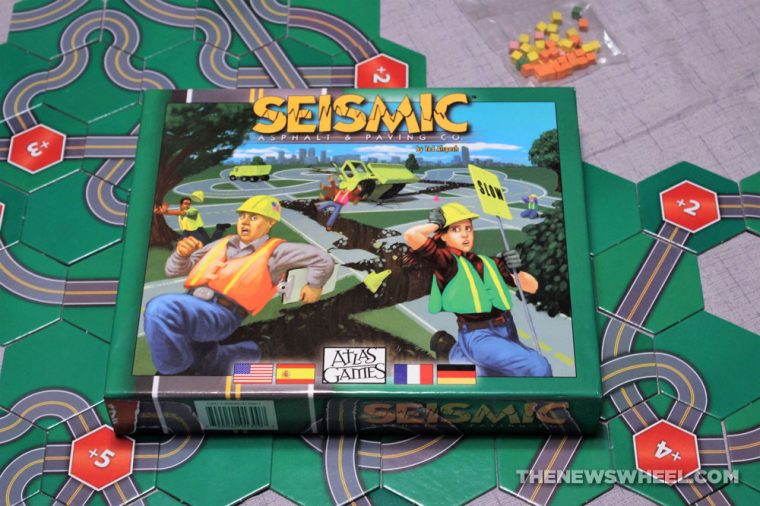 Highways are seemingly always under construction, especially in California where earthquakes abound due to the San Andreas fault. It’s a pain for commuters, but it’s good business for road construction crews — and it’s a creative idea for a board game!

In Seismic Asphalt & Paving Co., you’re in charge of a road crew who’s contracted to repair the roadways around San Andreas. Unfortunately, unexpected tremors threaten to demolish the work you’ve done. It’s a tile-laying board game that’s actually about building roads. Here’s what I thought of it.

Fun in California: The best theme parks in SoCal to visit 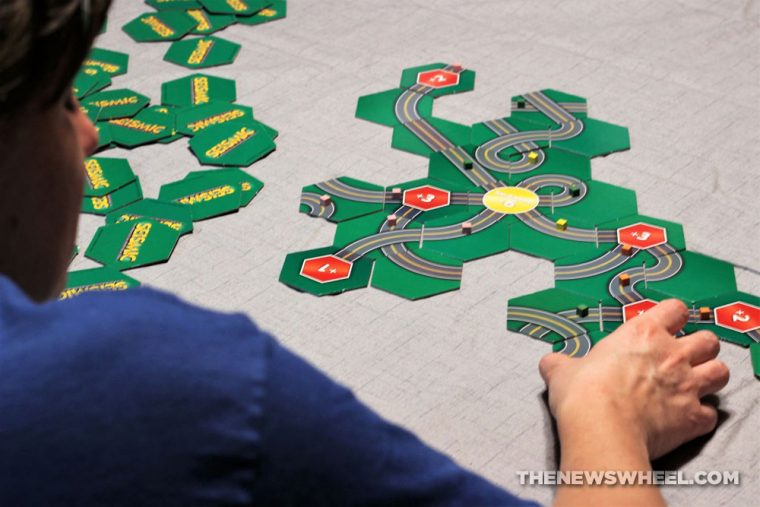 The game begins with the main highway intersection tile (San Andreas) placed in the middle of an empty table. The rest of the hexagonal tiles — a variety of curves and straightaways — are shuffled into a face-down pile.

Every player obtains a set of colored cubes that designates their road crew. Each turn, the active player selects one of the three face-up available tiles to add to the growing network of highways wherever they choose. If the stretch of highway that new tile expands upon isn’t already claimed by someone’s road crew, that player can add a cube from their own crew to claim it.

At the end of the game, that player will score 1 point for each road tile in that stretch of highway, plus bonus amounts from the intersections it begins and ends at (a road must have both ends terminating at intersections to be considered “complete” and scored). 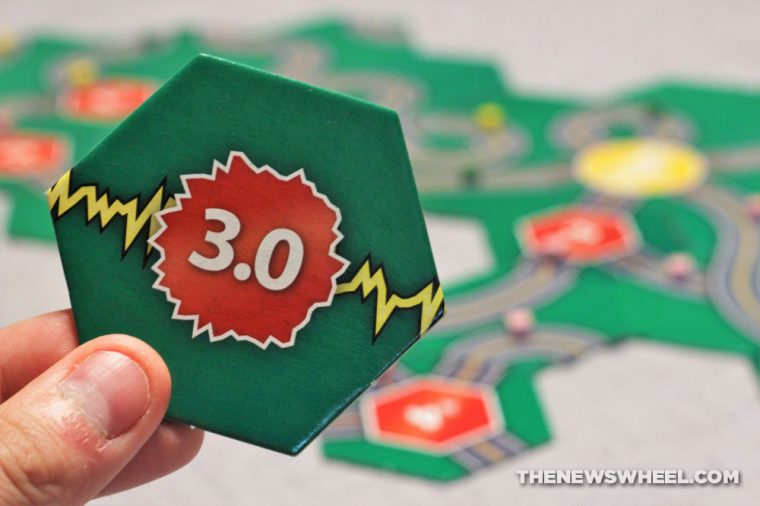 Before ending their turn, the player flips over another tile to add to the available selections. If that tile is a quake tile, some road tiles are immediately removed from the highway network. The side of San Andreas with the most tiles extended from it is shortened by the removal of tiles per the amount prescribed on the quake tile, so some completed roads may no longer be complete.

Once all the tiles are placed, the game ends and scores are calculated. The person with the most points wins. 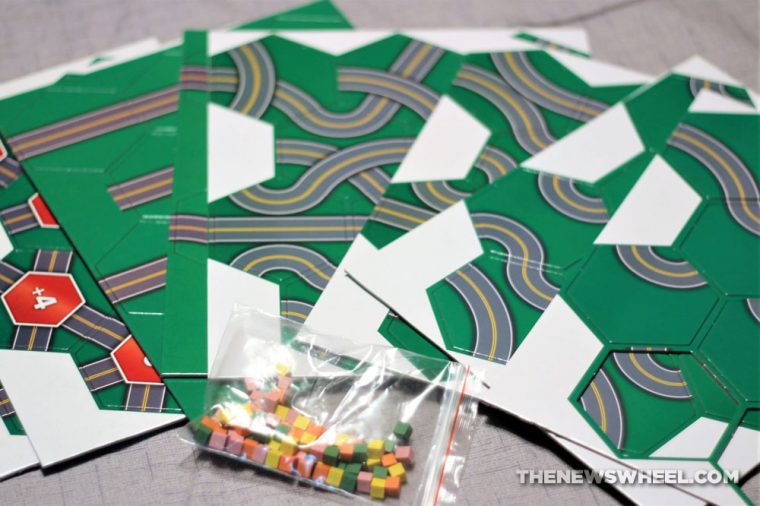 The game components are sufficient quality: the tiles are rigid, glossy, and shouldn’t peel apart. You’ll have to sand them a bit to ensure their sides are smooth. The box has an insert, which keeps all the loose tiles form banging around in the box (it doesn’t hold them in place, just gives them less room to slide around).

The most unappealing aspect of Seismic is the visual design of the game: The artwork and color options are unattractive. Instead of the road tiles having detailed, creative artwork and flair (like how Carcassonne has trees, abodes, and grass “texturing” dotting its tiles), Seismic tiles are a vivid, unsightly shade of solid green with dull grey roads. It’s the same color design scheme on the box, and it robs Seismic of having visual appeal or personality.

Play on the Go: 5 fun racing games for your phone 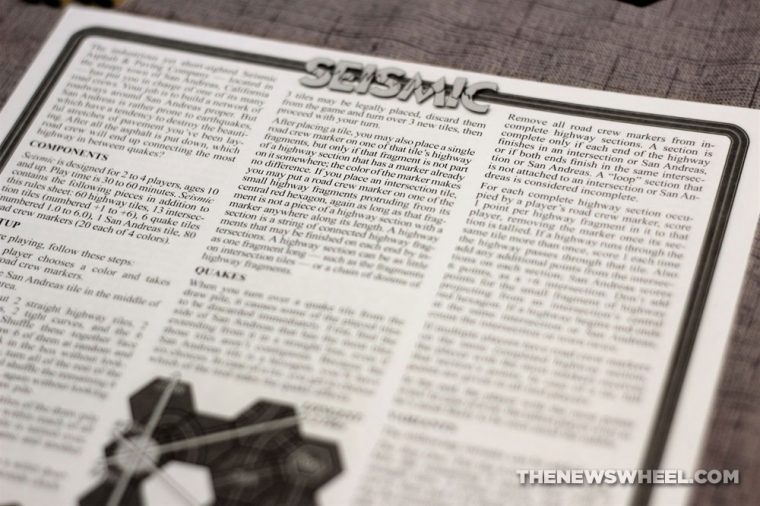 The instructions come in English, German, Spanish, and French, each one receiving a solid page of mostly text (only two basic visual supplements). It’s a quick read, though, and makes sense thanks to clear, carefully phrased instructions. We didn’t run into any frustrations understanding the game, playing it or scoring it.

Luckily, there aren’t many rules to memorize; the idea of the game is very straightforward, so it’s easy for new players to catch on and perform well. 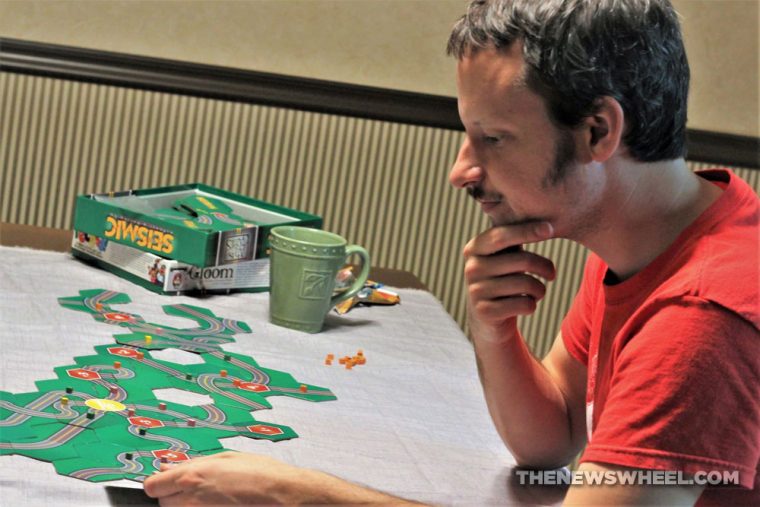 Who would’ve ever thought to make a road-building, tile-laying game that actually involved constructing paved roads? It makes a lot of sense, and the addition of the random impact (pardon the pun) of the earthquakes make Seismic Asphalt & Paving Co. a surprisingly competitive game.

What you’d assume would be a stripped-down imitator of Carcassonne actually feels very different thanks to the variable of tile removal from the earthquakes. While Carcassonne encourages you to always pursue the longest road, Seismic’s earthquake disruptions cause you to hedge your bets and carefully decide where to place your next tile. It requires a lot more thought than a mere flip-and-place game, instilling plenty of pressure into each turn that basic Carcassonne lacks.

Seismic Asphalt & Paving Co. may be an ugly-looking game, but it has surprisingly strategic value and is a creative automotive-themed game. If it ever was reprinted with better artwork, I’d gladly make it a regular in my game rotation. Still, it’s a title I’d recommend playing — even if the theme of road construction doesn’t interest you.

You can purchase Seismic Asphalt & Paving Co. on the Atlas Games website.