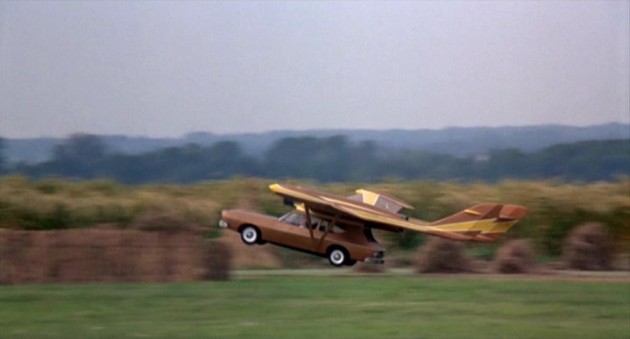 Legendary actor Sir Christopher Lee has passed away at the age of 93, after being hospitalized with heart and respiratory problems.

Lee’s most iconic role may have been his interpretation of Dracula in the Hammer Horror films of the 1960s, but over the course of his lengthy career, he did (cinematic) battle with a wide array of colorful characters, including Sherlock Holmes, Gandalf, Yoda, and James Bond.

Lee went toe-to-toe with Roger Moore’s Bond in the 1974 film The Man with the Golden Gun, playing the title role of skilled assassin Francisco Scaramanga. TMWTGG is one of the weaker entries in the series, but Lee’s performance is one of its redeeming qualities—and so is the ridiculous flying AMC Matador Coupe that he drives (er, pilots) in the movie.

Here’s the winged Matador in action, albeit with foreign language dubbing (hey, at least you don’t have to listen to the obnoxious Sherrif J.W. Pepper character):

The now-defunct American Motors Corporation manufactured the Matador from 1971 to 1978, but the 2-door coupe model that Scaramanga and his miniature sidekick Nick Nack (Hervé Villechaize) prefer was only produced from ’74 to ’78.

Lee was driving a 1974 AMC Matador Coupe, which has a nice, aerodynamic design, but aside from that, doesn’t seem like a particularly memorable Bond car. Until, of course, Scaramanga slaps some wings on that baby and escapes into the sky, carrying a kidnapped Mary Goodnight (one of the worst Bond girl names ever) in the trunk.

As you may have guessed, the actual machine wasn’t really airworthy, so a three-foot-long scale model was used for the flying sequences. The real car made the rounds at auto shows as part of AMC’s marketing for the Matador. 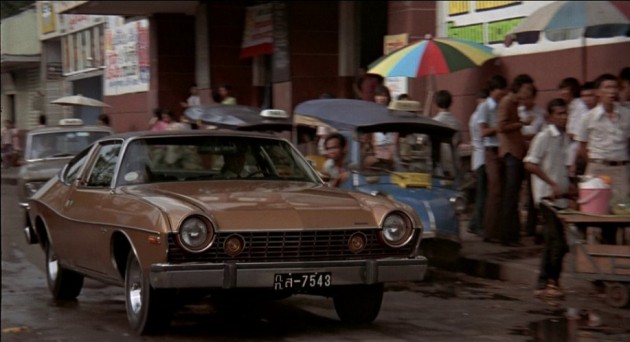 Christopher Lee was actually a step-cousin of James Bond’s creator, British novelist Ian Fleming, who had once offered him the role of Dr. No, the first-ever Bond movie villain. Lee accepted, but the producers had already chosen someone else for the part. Once he finally got the chance to play a Bond baddie, twelve years after the debut of Dr. No, he made the most of it, portraying Scaramanga as a killer who possessed the talent and charm of Bond, but lacked the ethics.

While Lee may not have really piloted an AMC Matador, he did serve in the Royal Air Force as an Intelligence Officer during WWII in real life, and to this date, his missions remain classified.

For his military service, charity work, and unforgettable performances, Sir Christopher Lee will be greatly missed.