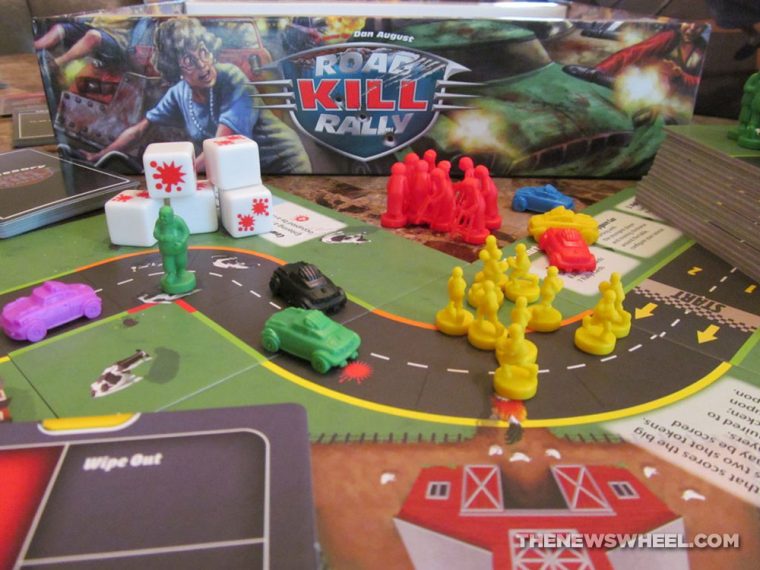 You know what too many racing board games are missing? Targets. Too many motor racing tabletop games are simply about making it to the finish line while maneuvering around a track. Simply put, there should be more going on throughout the racetrack than driving through it. And you know what would make great targets? People–especially kids and elderly women.

Z-Man Games is one of my favorite publishers (who doesn’t love Pandemic, Carcassonne, and Agricola?), so I was excited to hear about a campy board game they released a couple years ago called Road Kill Rally. Judging by the title–and the cover art–this is a game for fans of the movie Death Race 2000 who enjoy the idea of running over pedestrians with their missile-equipped cars.

Are You a Competitive Gamer? You’ll love the brutal, audacious Thrash Car game! 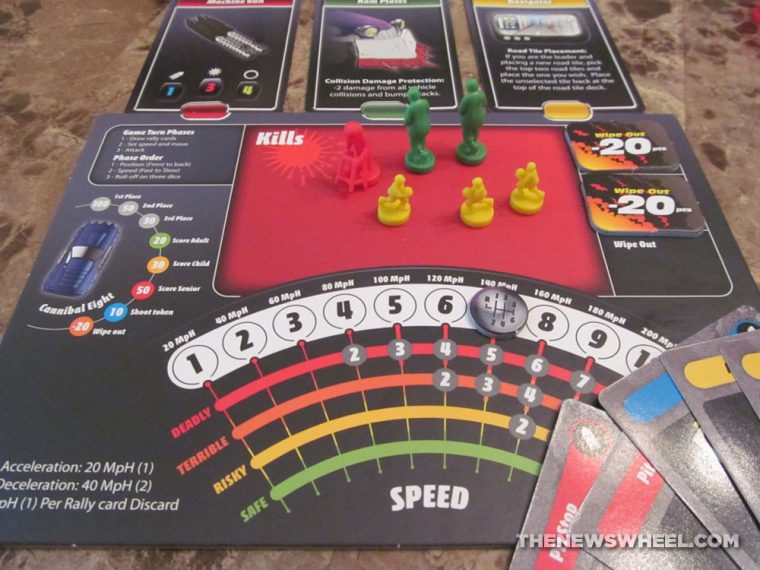 The events of the game take place in a futuristic, dystopian world where the globally-aired Road Kill Rally motorsport receives billions of views and has become a major spectacle. Yep, it’s directly inspired by Death Race 2000.

Road Kill Rally is a race, but it’s about more than crossing the finish line first. To win, you have to earn the most points, and there are multiple ways to do that: attacking fellow drivers, running over pedestrians, and completing the race.

Set up involved all players choosing a colored car with corresponding dashboard, equipping upgrade cards, and drawing a hand of rally (action) cards. Each car begins at the starting line; the track is built as the cars advance, new tiles being added to continue the track as the game progresses.

Each round consists of two phases:

Players keep track of their car’s status, speed, and points on their personal dashboards. Once players cross the finish line, points are tallied and a winner is crowned. 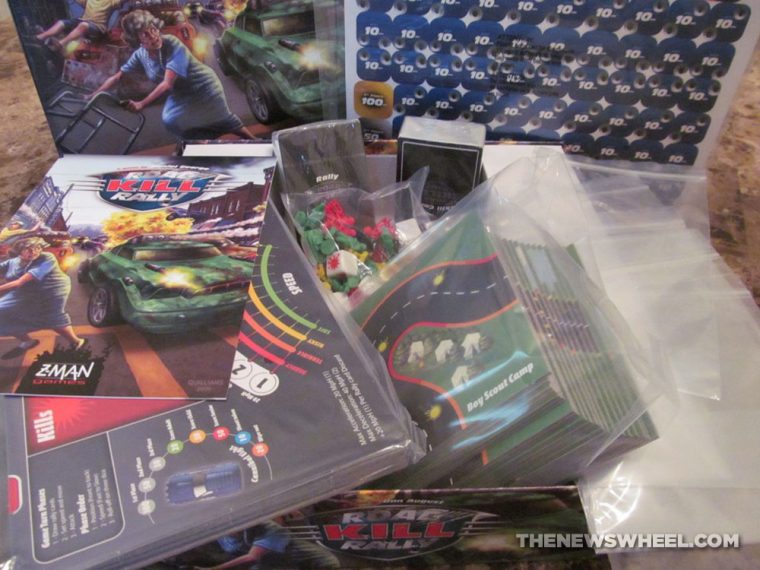 All of the components of Road Kill Rally are stunning. From the detailed artwork on the track tiles to the intricate walkers on the old lady miniatures, you get your money’s worth in this box. Everything comes finely sealed in plastic wrappers, with empty zip-close baggies included for extra storage. Everything nicely fits in the box without sliding around.

All the cards have unique, dynamic artwork on them, as do the square track tiles. All of the components are made of high-quality cardboard and plastic, especially the pedestrian and vehicle miniatures. This is undeniably a good-looking and high-quality product.

Another Wild Game: Play as a crazy monster driving a hot rod in this customizable racing game 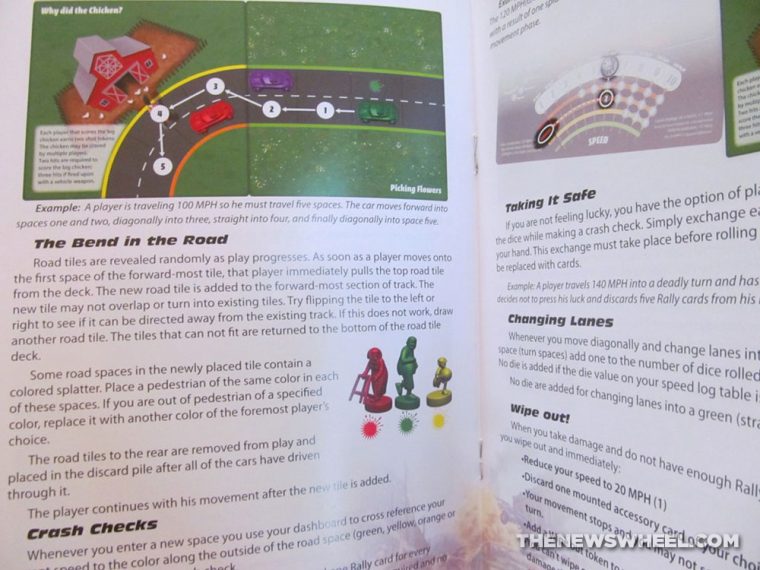 For as many components and intricacies are involved in Road Kill Rally, I was surprised at how brief and simple the rule book is. It was a quick read and fairly simple to explain the mechanics to everyone else (we were all playing for the first time). Set up took some time, but overall it wasn’t long until the game was underway.

We soon realized that the directions were too vague and didn’t explain many of the scenarios we encountered on the board. I would’ve liked to have had a lengthier, more detailed rule book. A glossary explaining the rules on each rally card would have been helpful too, as each card has its own unique actions that affect the game.

There are a lot of steps in playing Road Kill Rally, and the directions don’t nearly explain as many of them as they should. While I enjoy the pages spent on backstory and humorous fake trivia, a lot more work needed to be done to enhance the directions–even if that was expanding the FAQ section.

Blacktop Brutality! This hilariously morbid card game is about running over animals… 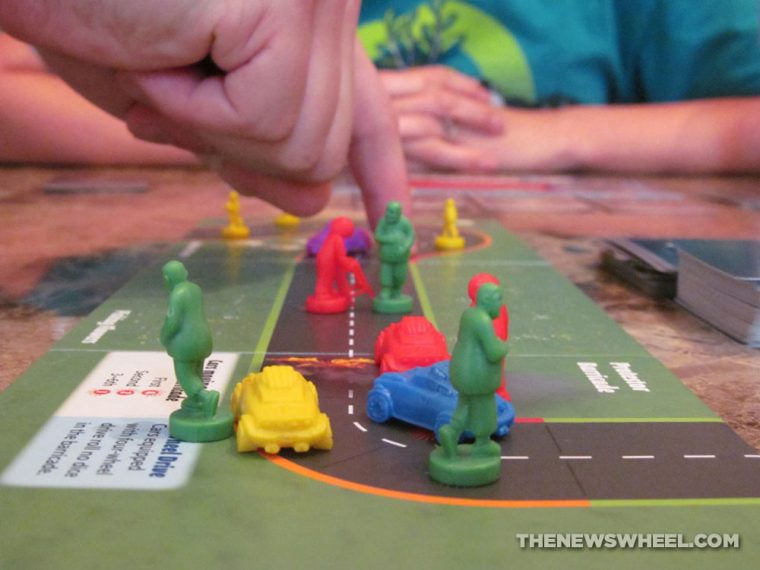 Many of the other reviews I’ve read of Road Kill Rally come down to (usually verbatim), “If you like the twisted theme, you’ll like this game.” That’s a pretty solid sell, and Road Kill Rally has received plenty of positive reactions from the gaming community. I’m not easily offended and I have a morbid sense of humor, so I was looking forward to giving it a spin.

Despite some laughs that were generated by the rampant irreverence of the game–plowing our cars through elementary schools and nursing homes–our experience playing was more of frustration than glee.

The simplest way to explain our Road Kill Rally experience was that its game play did not complement its theme. While the tone is frantic, riotous, and irreverent, the mechanics are over-complicated, slow, and vague. It needed to be scaled down and streamlined to be a shorter, less tedious experience. Some aspects feel unbalanced, resulting in players going back and forth–attacking and wiping out–without progressing. 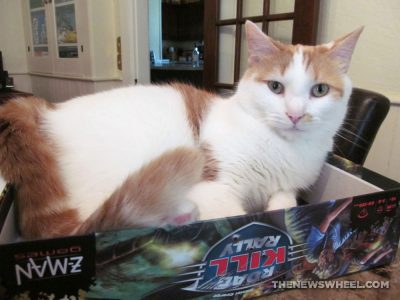 I like that players’ turns are divided into steps that encourage frequent participation (everyone moves before everyone attacks). There’s also a good balance of risk vs. reward (being in front will get you first shot at pedestrians but will leave you vulnerable to attacks). However, success relies heavily on chance, and it’s uncommon that players actually complete their objectives (after playing for an hour, only 3 pedestrians were hit while we all wiped out multiple times).

The other drawback is the over-utilization of the rally cards. For as many tasks the cards are used for–adjusting speed, attacking pedestrians, attacking other cars, defending from other cars, receiving speed damage–a five-card hand is much too small. Either increase the minimum card allowance or find other ways to perform these actions. Otherwise, like we did, players will be wiping out every other turn.

Clearly, a lot of effort was put into making Road Kill Rally. There’s a fantastic game buried within Road Kill Rally if you have the patience to create house rules and find ways to strip away the more tedious, over-complicated aspects. The components are fantastic, the theme is fully realized, and the competition is wild.

Road Kill Rally is available for purchase through Amazon, newegg, Ebay, and other retailers.