Riders get ready for launch to get to the concert on time.

Whether you are a hard rock, coaster, or car fan, the Rock ‘n’ Rollercoaster at Disney’s Hollywood Studios park has your name on it.

Not many of us have had the chance to zip through the Hollywood Hills in a stretch limousine, and Disney is all about making dreams come true. This time, they’ve brought Aerosmith along for the ride in this twisting, turning, freeway adventure.

As the second-fastest attraction at Walt Disney World (just behind Test Track), this one-of-a-kind coaster launches riders from 0 to 60 in 2.8 seconds. This is an indoor coaster, with lots of darkness and light effects. Riders will experience three inversions and plenty of speed as they race to make it to the Aerosmith concert on time. About 4.5 G-force will press down on riders during the first inversion; more than an astronaut on a space shuttle launch. 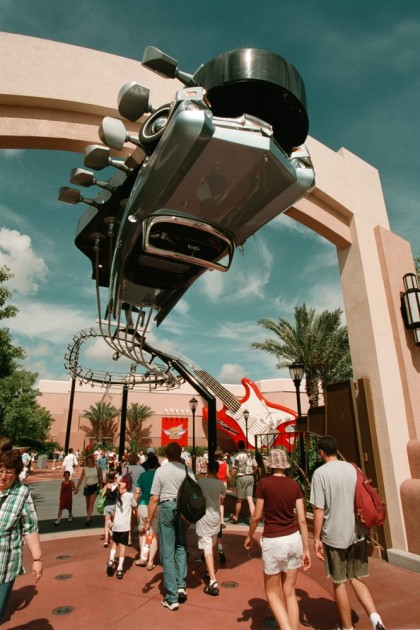 The custom limousine coaster cars are made to look like super-stretch limos that have been tricked out for Aerosmith. Of course, they always have a sweet sound system, so these cars feature 120 speakers to jam out to during your ride.

During the ride, neon signs fly by riders, including an iconic giant donut. Road signs are all along the track, adding to the illusion that you are on a wild limousine ride. Avoid this one if intense thrill rides aren’t your thing, but if you’ve got a need-for-speed, this is a can’t-miss.