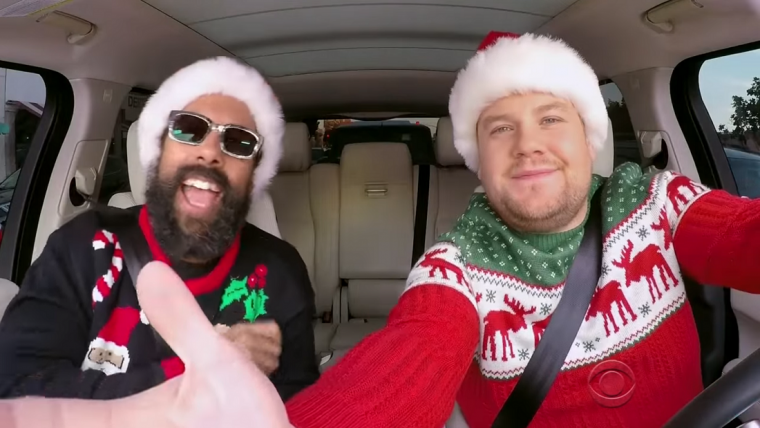 With the holiday season in full swing, everyone is looking for ways to celebrate. James Corden is using his popular series, Carpool Karaoke, to send out a bit of holiday cheer with a Christmas song mashup. Corden included never-before-seen clips from popular Carpool Karaoke episodes throughout the year with artists singing “Santa Claus is Comin’ to Town.”

Of course, with episodes being filmed throughout the year – in Southern California – the scenery doesn’t exactly look like Christmas. However, that didn’t stop artists from getting into the Christmas spirit. In fact, Harry Styles and James Corden ended up under a bit of invisible mistletoe, and the two locked lips at the end of the song.

This is not the first year Corden has done a Carpool Karaoke Christmas special. In fact, 2017 marks his third Christmas special. Last year’s episode featured Mariah Carey and other popular artists singing Carey’s classic “All I Want for Christmas Is You.” The year before, in 2015, artists like One Direction, Stevie Wonder, and Justin Bieber joined together to sing a rendition of “Joy to the World.”

Carpool Karaoke recently made the transition to Apple Music, a paid subscription service, in an effort to proceed as an independent series. However, James Corden has continued to include episodes of Carpool Karaoke on The Late Late Show with James Corden, with episodes still reaching upwards of tens of millions of views on YouTube.