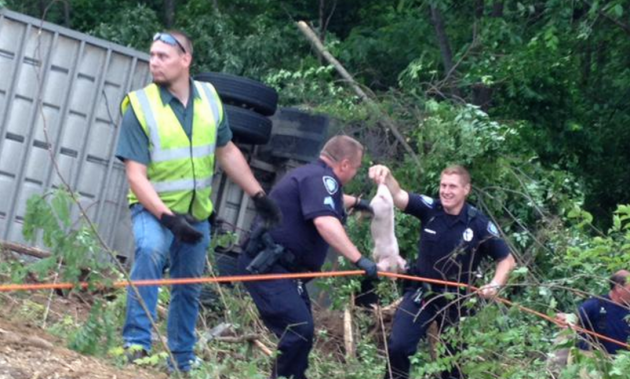 Last week, Michigan police found and arrested a runaway pig (and then had to reupholster their squad car’s back seats as a result). Tonight, police in Southwestern Ohio are leading a much larger manhunt pighunt, after a semi-truck crash led to hundreds of piglets being let loose in Greene County.

Police officers and area farmers arrived on the scene to rescue the surviving pigs… so that, you know, they could be safely slaughtered.

Many of the other piglets, however, escaped into the woods, and some may never be found.

“Probably we’ll never get a hold of them,” Xenia Township Fire Chief Dean Fox told the Dayton Daily News. “We’ll try as hard as we can, but we probably won’t retrieve them all. I can’t say what will happen to the pigs.

“If somebody finds a pig and wants to turn it in, call the local law enforcement and we’ll try to take care of it,” Fox added.

Notice that Fox recommended contacting local law enforcement only “if somebody… wants to turn it in,” implying that if you find a roaming piglet, you could always just keep it. Piglets are awfully cute/delicious.

The driver—who will be cited with failure to maintain control of a vehicle—was traveling with his fiancé, who has been hospitalized after being injured in the accident.