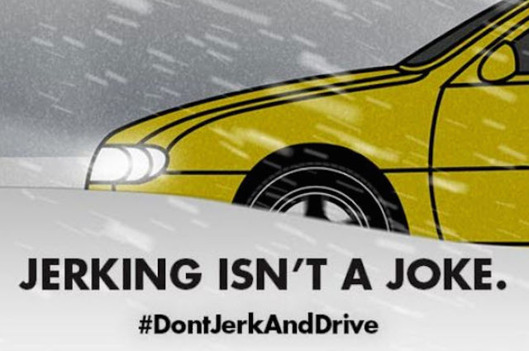 Thing jerking and driving is bad? Sex while driving is a big thing among students at University of South Dakota

Turns out, jerking anything may be the least of South Dakota drivers’ worries. The bigger issue, according to a professor at the University of South Dakota, might just be an act that takes two to tango.

“There are people getting killed out there because they’re having sex while driving, either with themselves or with another person,” Cindy Struckman-Johnson told the Argus Leader. “If they’re getting killed, we have an obligation to understand it.”

According to a paper co-authored by Struckman-Johnson with her husband Samuel Gaster, one third of all men attending USD have engaged in some kind of sex while driving a vehicle. Nine percent of all female respondents admitted to similar acts.

Further, more than one third of all drivers admitting to having sex behind the wheel said that they were speeding while doing so—half or more said they were traveling at speeds ranging between 61-80 mph at the time, another third said that they had drifted from their lane, and 11% admitted to letting go of the steering wheel altogether. Two percent said they nearly got into an accident.

Why do something so dangerous and irresponsible while driving?

“One of the students wrote ‘it’s a five or six hour drive home,” said Struckman-Johnson. “What am I supposed to do?”