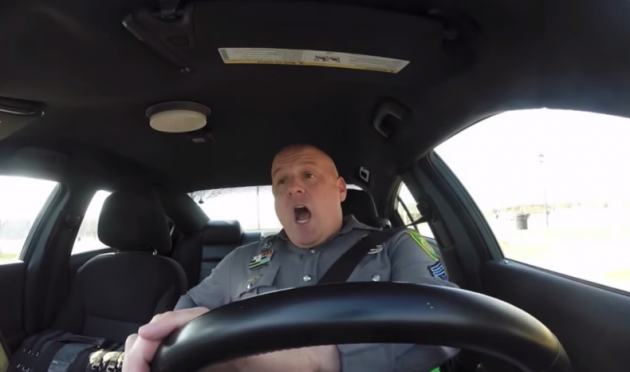 Officer Jeff Davis (AKA, the “Shake it Off Cop”) sings along to the hit single by Taylor Swift

Dover, Delaware police officer Jeff Davis—better known to as the “Shake it Off cop”—spent twenty years behind the badge before becoming an internet sensation. A video of Davis lip-synching to the Taylor Swift song “Shake it Off” while driving around in his police cruiser went viral after being posted to Facebook by the Dover Police.

If you still haven’t seen it, check it out here:

The feel-good video has garnered over 30 million views so far, landed Davis on the Today Show, and even garnered a response from Taylor herself:

Well now, comedy group Marca Blanca has put an enjoyably perverse spin on the video by mashing it up with crash footage from Russian dash cams. As a result, Davis’ soulful rendition of “Shake it Off” suddenly seems much more dangerously negligent:

While it may not be the kind of response one wants to see from an officer of the law, in this version, Davis does stay undeniably true to the song’s message of “shaking it off.”