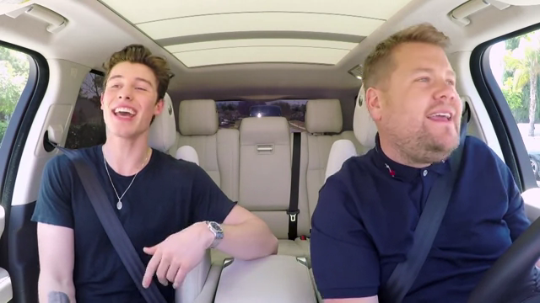 Driving through the city of Los Angeles, James Corden brought Shawn Mendes along for his commute to sing, dance, and even play a little ice hockey.

The duo started their ride with one of Shawn’s most popular and upbeat summer tunes, “There’s Nothing Holding Me Back,” before segueing into his most recent life update: he moved out. Shawn is no longer living with his parents – he has his own apartment in Toronto — but he admitted he still relies on them for a lot of things. In fact, his mom still insists on coming over and helping him out. “The thing is, she won’t let me [clean my own house].” From there, they dove into Shawn’s recent hit, “In My Blood,” a song that details his struggles with anxiety.

Award-Winning Brand: Mitsubishi earns title for the fastest-growing luxury brand in the U.S.

Someone gave James a tip that Shawn has a tiny obsession with Harry Potter. On a 10-point scale, with 10 being an obsession, Shawn rated his interest own in Harry Potter at a 9.5. He even has a notebook at home where he used to write down all of the spells. Of course, his obsession took hold of his appearance during the episode. As he discussed his love for magic and spells, a lightning-shaped scar appeared on his forehead along with round spectacles and Gryffindor robes. The shtick went even further when Shawn switched over to a full-out Dumbledore costume, beard and all.

After singing another one of Shawn’s hits, “Mercy,” James pointed out that Shawn doesn’t seem to have a mean bone in his body. When asked if he ever experiences road rage, Shawn replied that he doesn’t even honk his horn. James dared Shawn to roll down the window and yell, “Wrong lane, a*****e!” Hesitantly, Shawn agreed and screamed at a car passing by. When James joked that the car was turning around to yell at them, Shawn laughed and said he’d never want to rely on James in a fight. “I don’t think you could find two people who want to find less than you and I right now,” he said. “We would just have to get out and hug them.”

Green Driving: Help save the planet with the 2018 Mitsubishi Outlander Plug-in Hybrid

Shawn showed off his vocal abilities even further with “Treat You Better,” adding a handful of runs into the mix. Once the song ended, James asked, “What’s the most Canadian thing about you?” Shawn replied that he used to play ice hockey, and since James had never even tried it, they decided to give it a try.

“This was a mistake,” James said before even stepping on the ice. “I don’t want to do this; this is a terrible idea.”

After struggling to maintain his footing, James made his way over to the goal. He successfully blocked several of Shawn’s attempts, but then fell on his face, knocking his helmet off. “This is my first and last time playing hockey,” said James. “Let’s get back in the car.”

They finished their long commute to work with a rendition of “Lost in Japan.”