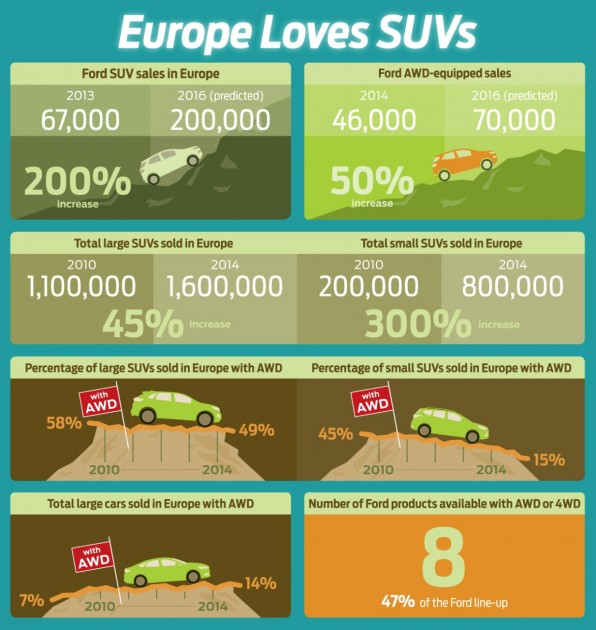 Ford really loves to conduct studies and surveys, and it is particularly fond of conducting studies and surveys that attempt to determine just what makes Millennial car-buyers (and potential car-buyers) tick. See, for example, its latest survey analyzing SUV sales in Europe and how they reflect the buying preferences of…you guessed it…Millennials.

The Ford-sponsored survey, entitled “SUV Generation,” polls Millennials and finds their preferences lies with SUVs. This, Ford surmises, suggests that the European SUV sales boom will only continue over time. It also suggests that as Millennials become increasingly financially stable, so too shall the popularity and sales of SUVs increase.

“The survey makes two important points—the SUV boom in Europe is not a passing fad and young people are not as ambivalent about car ownership as some suggest—especially when it comes to SUVs,” said Roelant de Waard, vice president, Marketing, Sales and Service, Ford of Europe. “For both rational and emotional reasons, many younger buyers in Europe see SUVs as the perfect choice for them.”

The study finds that Millennials, who comprise roughly 24% of the European population, are widely considering SUVs for their next vehicle purchase. Of the 5,000 respondents from France, Germany, Italy, Spain, and the UK, 25% said that they are considering SUVs.  54% of those polled said they believe that SUVs are the best choice in terms of diversity between city and country driving, 52% believe they are safer than all other vehicles, and 84% believe that SUVs have improved in terms of eco-friendliness in the past five years.

Ford will likely use this data as a means to promote the new Euro-spec Ford Edge, which is set to debut later this month at the Frankfurt Motor Show.