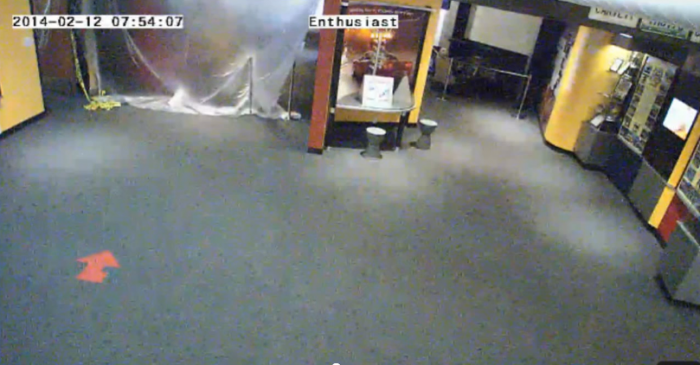 The affected area of the National Corvette Museum

Early this morning, a sinkhole opened up beneath the National Corvette Museum in Bowling Green, Kentucky, resulting in damage to eight of the cars on display.

According to an AP report, National Corvette Museum spokeswoman Kate Frassinelli said that six of the cars were owned by the museum, including a 1962 Corvette (black), 1984 PPG Pace Car, 1993 Ruby Red 40th Anniversary Corvette, and 2001 Mallett Hammer Z06 Corvette. Most substantial, perhaps, are two white Corvettes, from 1992 and 2009, which are the one millionth and 1.5 millionth Corvettes ever produced, respectively.

The other two vehicles reported lost, a 1993 ZR-1 Spyder and a 2009 ZR-1 Blue Devil, were on loan to the National Corvette Museum from General Motors. No injuries have been reported, and Frassinelli said that the rest of the museum will remain open during Wednesday.

The vehicles were stored in the museum’s Sky Dome, and it is said that the sinkhole is around 40 feet wide and 20-30 feet deep. Executive Director of the National Corvette Museum, Wendell Strode, told CNN that the total value of the damaged cars is not immediately quantifiable, but noted that it is “substantial.”

“As it started happening, it triggered an alarm, so the security company called an employee,” Strode told the Bowling Green Daily News. An alarm was triggered at 5:38 EST this morning.

“This is going to be an interesting situation,” Strode said. A full timeline of events can be found at WBKO.com.

First photo from the Corvette Museum of the sinkhole with eight rare Vettes inside: pic.twitter.com/ZrbCaeJEwP

Stay tuned to The News Wheel for further developments.