A student in York County, South Carolina, is fighting back after his school told him that he had to remove two flags in the bed of his truck.

Peyton Robinson, a senior at York Comprehensive High School, was told to remove his flags because it presents a safety issue. Per WCNC, Robinson made the following comment on his Instagram:

“I’ve been told by 2 administrators at my school this morning that I can’t have an American Flag on my truck because other people have complained about it. Well let me tell you something, I have every right to fly an American flag. It will not be coming off of my truck. This really pisses me off. I ask that everyone that sees this post that attends York Comprehinsive flys an American flag of some sort on whatever they may drive to school tomorrow to prove a point. I will not let this go down without a fight. “#America #fightforourright

According to a report from WBTV, administrators from the schools have told Robinson and students that flags are not to be flown from their vehicles for safety reasons.

“I don’t see a safety issue,” says Robinson. “I mean I understand it’s a big flag—it’s 4 by 6—but nobody has ever complained about it being in their way or anything.”

It’s likely not so much the fact that it’s a 4×6 flag as much as it’s two 4×6 flags that pretty clearly obstruct rear visibility. When taking into account that teenage drivers are, by and large, awful at driving, it’s not difficult to see the school’s position of the flags being a safety concern. 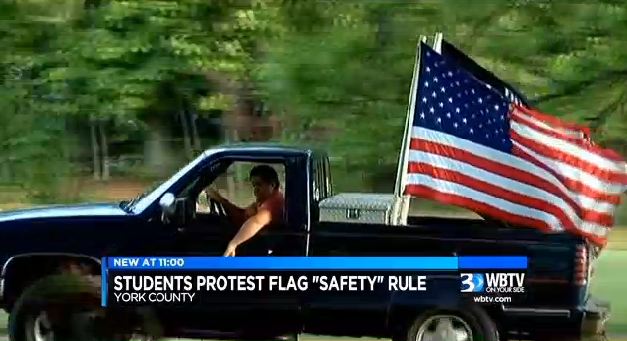 Because who needs to see out the back window anyway?

The fact that this is an American Flag and a POW/KIA flag we’re discussing? That’s likely incidental. Two flags of that size would create a visual obstruction for Robinson and possibly other drivers regardless of their content. Outside of Robinson’s story, there’s no confirmation that the original complaints were relative to individuals taking offense to the fact that this was a particular kind of flag and not to the fact that flying two 4×6 flags in your truck is just kind of an obnoxious thing to do.

Even if this is an instance where someone is offended by Robinson’s loud-ass patriotism, it’s still the school’s druthers to determine what they view as appropriate conduct within reason. The Supreme Court recently rejected a free-speech appeal from students at a California high school who were fighting the school’s ruling that they could not wear American flag t-shirts on Cinco de Mayo. If it’s on their property, they have latitude to make certain judgment calls regarding demonstration. If Robinson and his parents opted to take this case to the courts, they would likely be at the end of a similar result.

Students plan to protest the school’s actions by driving to school with flags on their cars.

“I’d understand if it was the Confederate flag or something that might offend somebody,” Robinson said. “I wouldn’t do that. But an American flag—that’s our country’s flag. I have every right to do it.”

He has the right to do it…everywhere else except for the school, at least if they so decree and until such a time where legal precedent overrules them. Based on the seemingly hundreds of photos of his GMC on his Instagram, it seems like his school is the only place Robinson chooses to fly his flags. 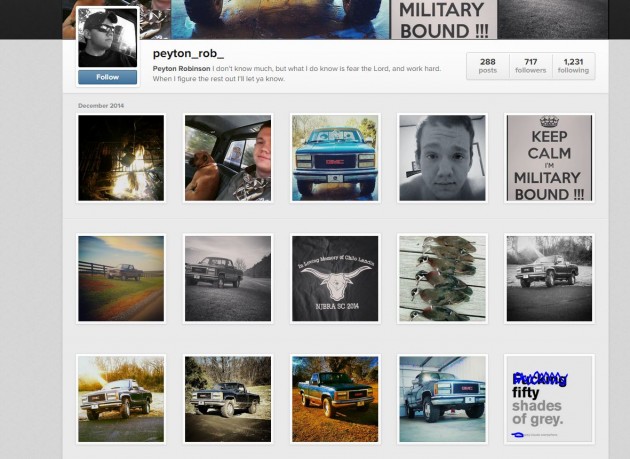 Almost as if it’s all some kind of…I dunno…attention-grabby thing?

“Just proud to be an American,” Robinson adds.

If the school’s decision was that the flags needed to come down solely because American symbolism offends someone, then that might be subject to a different kind of debate altogether. More likely, this is not that debate. Why not compromise and simply downgrade to smaller flags? After all, these symbols should speak the same volumes regardless of the physical size of the flag.

In any case, and despite whatever the intentions may be on either side, this is likely to cause a great deal of debate between people who love enormous flags flying from truck beds and those who don’t. I can’t wait to see how much money this kid’s family raises in the eventual “HELP FUND OUR RIGHT TO FIGHT FOR AMERICA AND FLAG-FLYING” GoFundMe campaign.