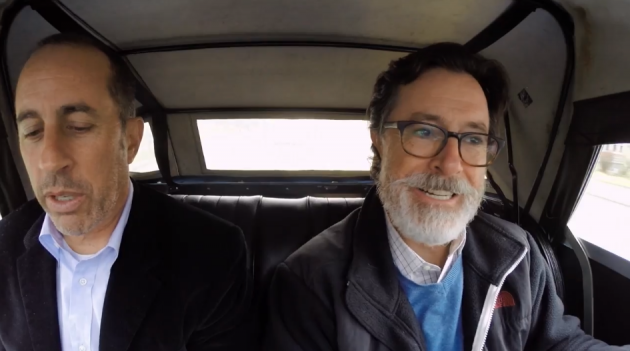 In the latest installment of Jerry Seinfeld’s Comedians in Cars Getting Coffee web series, the iconic comedian takes late night funnyman Stephen Colbert for a spin in a gorgeous blue 1964 Morgan +4.

The pair takes turns driving the vintage sports car to and from their breakfast destination (and, in one moment of highly-visible product placement, straight through an Acura dealership).

You can watch the full 16-minute video here.

There are some interesting revelations here for fans of The Colbert Report, like the fact that Colbert’s wife actually knew Daily Show host Jon Stewart years before either one was famous—back when he was Jonathan Stuart Leibowitz (and “not funny,” according to her appraisal of the future host). Also, Colbert says he was going to quit the Report whether or not he inherited the Late Show from David Letterman, which he claims “just fell in [his] lap.”

Also, Stephen is a big Neutral Milk Hotel fan, and Jerry is decidedly not.

Oh, and Jerry is good at driving stick, and Stephen is decidedly not…