The Stig and Darth Vader Drive a Porsche 550 Spyder in Saskatoon, Saskatchewan 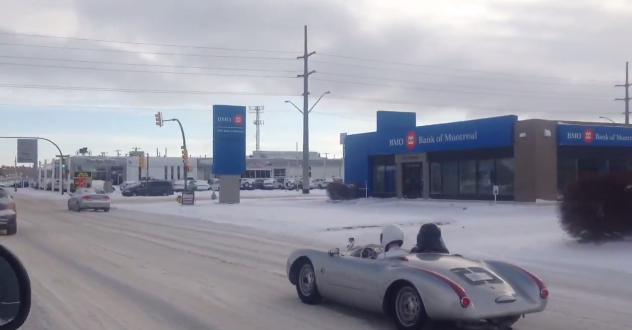 “What do you want to do tonight, Vader?” “The same thing we do every night, Stig… try and take over Saskatchewan!”

While this article’s headline may sound like the result of a particularly spirited game of Mad Libs, we assure you that the Stig and Darth Vader really did drive a Porsche 550 Spyder on a snowy stretch of road in the Canadian city of Saskatoon, Saskatchewan. The proof is contained in the 13-second video below:

The video comes to us courtesy of Bangshift, which offered the following explanation from Kody Rousseau, the 18th century Genevan philosopher comedian who captured the footage while he was driving:

“After receiving roughly 6 inches of snow in the past day here in Saskatoon, Sask. Canada a couple friends and I were on our way to Cabela’s. Last thing we expected to see was a exotic or classic car as they are usually already put away for a long hibernation and not seen until spring. Little did we know we would see a Porsche 550 Spyder on our main ‘cruising’ street in Saskatoon. And to top it off it was piloted by non other than Stig and Darth Vader was riding shotgun. Talk about an awesome sight! Haha. Top Gear must be in between episodes and Comicon must be over with, lol.”

In the video, there is clearly a camera mounted to the Spyder’s hood, so we would imagine this was being filmed for an episode of Top Gear. Darth Vader, of course, has been collecting Porsches ever since his close friend Jay Leno got him hooked on classic cars.

Reduced Time Until Top Luxury: Porsche Macon’s waiting list has been reduced in the US