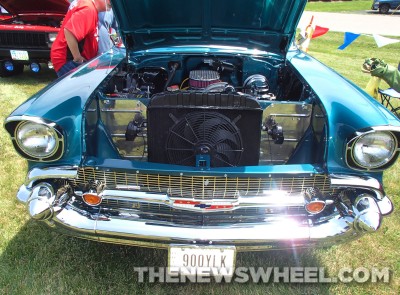 A lot can happen in 30 years. NBC could air The Office over three times (please do this); a baby could grow to become a doctor (with just a couple more years of residency left); American Idol could churn out three awesome stars and 27 nobodies; and a stolen 1957 Chevy Bel Air could enjoy a whirlwind of adventure, only to be returned to its rightful owner in the very end.

No, we’re not kidding. According to Fox News, Ian “Skip” Wilson, a now retired mechanic, hadn’t seen his precious Bel Air since it was taken from his home in Lake County, California, in 1984. He had apparently purchased it back in ’75 for just $375 with the intention of fixing it up.

While we’re not sure if Wilson ever got the chance to fix it up before it was stolen, we don’t think he minds too much now, 30 years later. That’s because he received a call from the California Highway Patrol, informing him that—gasp!—they’d found the stolen 1957 Chevy Bel Air, strangely aboard a cargo ship headed for Australia, likely with the intention of giving Holden the what for and bringing Chevy to the Oceania market.

And when the Bel Air was finally returned to Wilson? Well, let’s just say he was pretty happy to find that it now sported 17-inch racing wheels and a V8 engine that lays out 350 hp. On top of that, it was decorated with a monogrammed interior and rack-and-pinion steering.

Like we said, a lot can happen in 30 years. A whole heckuva lot.

Brought to you by Crossroads Chevrolet of Beckley, WV.