Study: Sitting in Traffic Pollutes the Air Inside Your Car 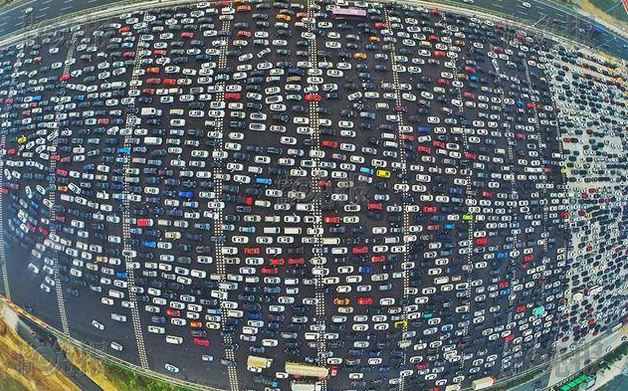 When we talk about pollution from cars, usually we are occupied with the area around the car. This is especially true in the past year, as more and more air pollution causes smog in larger cities, leading many capitals to temporarily ban cars or severely limit them from the roads.

However, there is one area subject to air pollution that is subject to the negative effects of that coal-rolling pickup—the interior of the car stuck behind him in traffic.

On average, American commuters spent 50 hours each in traffic last year, and according to analytics company Inrix, many Europeans aren’t far behind, with the average driver in Belgium spending 44 hours in traffic and the average German driver spending 39 hours. So, that makes it troubling that a new study published in Environmental Science: Processes and Impacts shows that pollution levels inside cars sitting in traffic is up to 40% higher than when traffic is moving.

Researchers at the English University of Surrey measured particle levels inside cars with varying ventilation settings while driving on a 6-km loop around the town of Guildford. Aside from the troubling increase in air pollution in cars in traffic noted above, the study found that, although the stops only accounted for 7% of the drive time, it made up 10% of the total exposure to harmful particles, with the exposure being six times greater for cars with their windows open than for pedestrians at three- or four-way intersections.

Presumably, this problem would be made much worse if the driver were already in a polluted area such as Beijing.

So, is there any way to help fight against this increased exposure? Well, the study found that the safest thing to do at intersections is to shut the windows and turn off whatever fans are blowing—this reduced particles by up to 76%. If you must have the air on, though, at least you will have a lower dose of large particles, which the study found were reduced by up to 68% by the car’s filtration system.