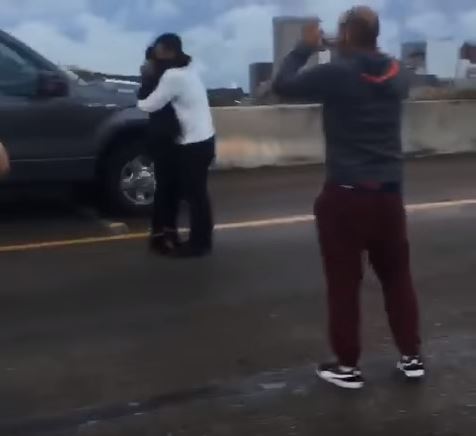 Look. I get it. You love your girlfriend or your boyfriend and you really want to make an impression when you take that next big step and ask for their hand in marriage. I can totally respect that. But if your big, brilliant idea for popping the question is shutting down one of the busiest roads in America without any forewarning or permission, then you might want to consider doing something a bit tackier, like proposing at a baseball game. That is, unless you also want the requisite side of road rage and possible misdemeanor charges.

Vidal Valladares Navas of Houston, Texas decided that the only proper way to propose to his girlfriend, Michelle Wycoff, was to shut down the I-45 with the help of eight vehicles filled with friends and family. According to Valladares, they lined the cars up in two rows of four and stopped dead in the middle of the Gulf Freeway just so the proposal could take place on a barren stretch of road.

You know those really cool proposal videos that make you all weepy because they feel so genuine and authentic, never mind clever and inventive? This ain’t that.

Driving at Night: How to stay safe on the road when the sun goes down

Imagine heading home after a long day at work, hungry and tired and angry, and then have to go from 70 miles per hour to 0 mph without so much as a warning because some frumpy-shirted asshat wants to propose to his girlfriend. Doesn’t sound like fun, does it? Might even be a bit mad? Naturally, drivers were generally none-too-pleased about being made to stop for such ridiculousness, but Valladares couldn’t have cared less.

“This is a place where I took my girl on the second date. I stopped on my motorcycle and she loved the view,” Valladares told KTRK. “I said, why not stop traffic for a couple of minutes and just propose right there?”

Houston Press, baffled that peer publications like the Houston Chronicle and KTRK seemed all too happy to salivate over the proposal, calls the coupling a “match made in Douchetopia” and the proposal an act of “outrageous pomposity perpetrated by people who have no regard for the safety of others.” I suppose they won’t be attending the wedding in March, then?

Just saw someone post a dangerous marriage proposal, in where he and his friends dangerously stop ALL traffic on I-45, they could have hurt many others.

Even better? Houston Press was quick to point out that Valladares, 24, just divorced from his wife of two years in June. Did he shut down the highway to serve his ex-wife the papers as well?

Speaking of being served papers, the Harris County District Attorney’s Office is charging Valladares and Wycoff with the Class B misdemeanor of obstruction of a highway. The charge carries a maximum fine of $1,000 and up to 6 months in county jail; for this very special case, maybe a plea can be made for reduced fines and jail time on the condition that these people stay off of social media forever. 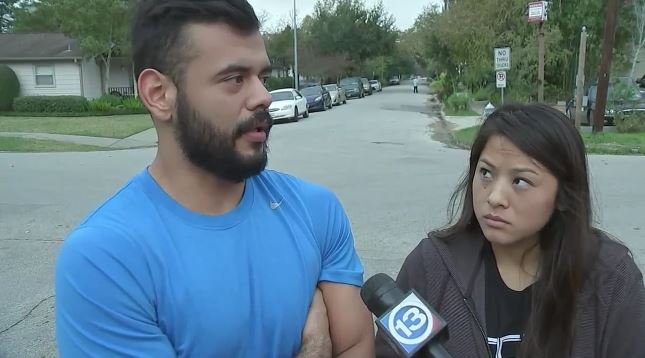 Fun fact: That guy in the background is also proposing to his significant other
Photo: KTRK

A KTRK reporter caught up with the couple after the charge was announced and made sure to phrase everything in such a way that Valladares was able to repeat that he wasn’t thinking that his stunt would cause trouble. Through tears, Wycoff said she just couldn’t believe the comments that she had been seeing about the stunt. Perhaps for her and Valladares’ next marriage proposals, they’ll opt for something a bit less ostentatious and resist the all-encompassing temptation to throw it on the internet right away.

Facing Other, Non-Proposal-Related Road Hazards: How to recover when your vehicle slides on ice