It seems like it’s been a long time coming, but the 2014 Specialty Equipment Market Association (SEMA) Show is finally upon us, and we can begin to reveal the delights being rolled out to us by automakers like Toyota. Last week, we previewed some souped-up models that would be on display at the annual show in Las Vegas, and today we can happily add one more to that list: the tailgating Toyota Tundra. 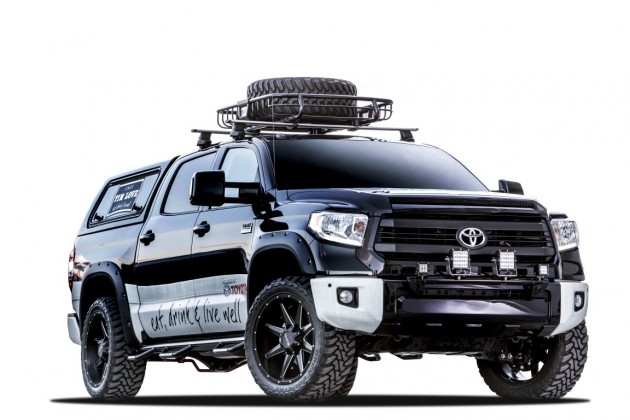 The treat-making Tundra in question was designed by celebrity chef Tim Love and his build team at Divine 1 Customs. The Tim Love Tundra takes the original truck and adds a 27-inch grill with an output of 24,000 British Thermal Units (BTUs), plus a rockin’ Rockford Fosgate audio system to truly get the party started. The truck is designed as the ultimate vehicle for football fans that enjoy tailgating parties in the cooler months, and is sure to make anyone who owns one an instant hero in their friends’ eyes.

Reliability: Toyota Vehicles that will Last a Lifetime

If you’ve never heard of Tim Love, allow us to enlighten you. The chef owns multiple restaurants in Texas, including Lonesome Dove Western Bistro, Woodshed Smokehouse, and the White Elephant Saloon (none of which we’ve been to, but all of which we imagine are delicious). Love’s cooking style is known as “urban western cuisine,” and features grilled, roasted, braised, and slow-cooked meals inspired by Texan cuisine. Sounds like the perfect dude to build a tailgating Toyota Tundra! 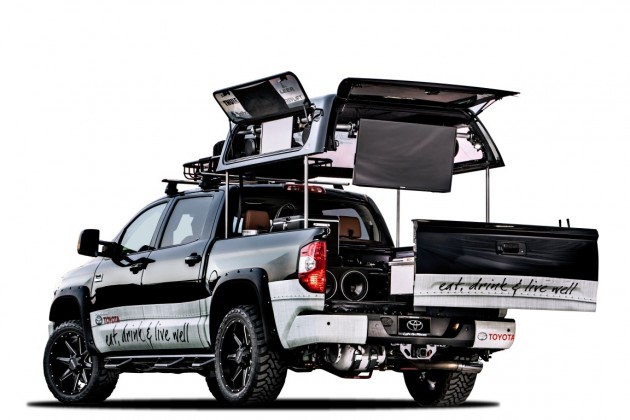 As well as an enviable grill, the Tim Love Tundra also features two John Boos cutting boards, two taps for beer and wine, and cold storage coolers. The truck made its debut at a recent college football game at Neyland Stadium in Knoxville, Tennessee, and was an instant hit for hungry sports fans. While waiting for their food to cook, tailgaters were entertained by the Tundra’s integrated audio system and onboard Playstation 4.

Look out for the tailgating Toyota Tundra if you’re headed to the SEMA Show today, as well as numerous other awesome custom Toyotas on display.