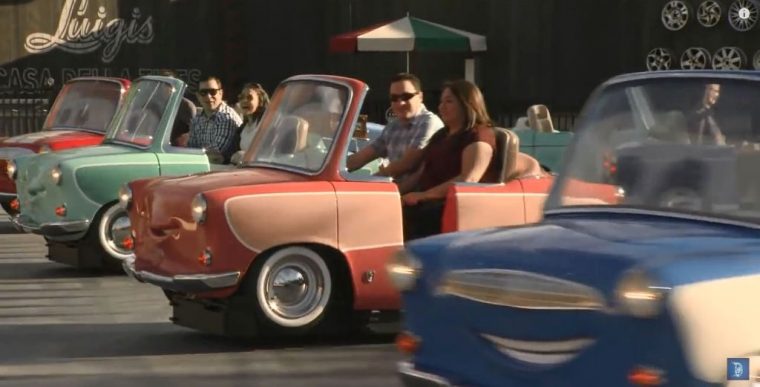 It’s time to go for a ride on Luigi’s Rollickin’ Roadsters!
Photo: Disneyland

One of the elements of Disney Parks that make then so memorable–whether in Florida, California, or abroad–is not just the dressed up characters but the uniquely-inspired rides. That’s where the magic comes alive and becomes truly immersive.

A new ride opens March 7th in Cars Land, part of Disney California Adventure in Anaheim. Guests can ride in two-passenger, old-fashioned Italian cars that will “dance” around on a trackless system. The new ride, called Luigi’s Rollickin’ Roadsters, is named after the 1959 Fiat 500 voiced in the Cars films by Tony Shalhoub.

The cars in Luigi’s Rollickin’ Roadsters are his cousins visiting Radiator Springs from their home in Carsoli, Italy. “Guests will ride along with our dancing cousins as they go through their dance moves inspired by Italian folk dances that they learned back in their villiage of Carsoli, explained Jeffery Shaver-Moskowitz, producer with Walt Disney Imagineering, in a promotional video by Disneyland.

Each of the cars, while they appear fairly similar to each other at first, has a its own special touches, paint scheme, and characteristics.

The most attractive aspect of the ride is the way it changes for riders each time. Not only will five different song options be featured, but “there are 18 individual paths that the vehicles run on,” according to Ray Warner, Executive Ride Project Engineer. “Regardless of what color vehicle you are on, they will switch paths on every run.” There are even two special cars created specifically for those with disabilities.

More information on the new ride can be found on Disneyland’s website.

Safe on the Streets: You can’t miss these school safety tips to keep your student safe