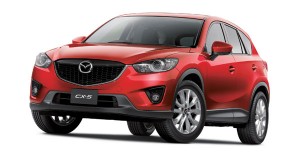 Mazda first unveiled the CX-5 in the summer of 2012 as a 2013 model, and now the time has come for the Japanese automaker to unveil the next installment of the sporty compact CUV that has become so incredibly popular.  The 2014 Mazda CX-5 hopes build on the unprecedented success of its predecessor.

“The ongoing success of the CX-5 is something we were hoping for and received in spades,” said Jim O’Sullivan, president and CEO of Mazda North America, in a press release. “From a clean-sheet-of-paper approach, CX-5 dove head first into the competitive compact SUV segment and created quite a splash. The overwhelmingly positive response from consumers and critics alike are testaments that performance and practicality can be a winning formula without compromises.”

The 2014 Mazda CX-5 delivers the best highway fuel economy rating at 35 mpg of any SUV in America – including hybrids – thanks to Mazda’s revolutionary SKYACTIV 2.0-liter engine.  For a little more power and a still impressive 32 mpg highway, drivers are able to opt for the 2.5-liter SKYACTIV engine on the 2014 CX-5 Touring and Grand Touring models.