Added on October 19, 2018  Rebecca Bernard  amandla stenberg , black lives matter , book-to-movie adaptations , just us for justice , new movies , The Hate U Give , The Hate U Give Movie , THUG , YA books , Young Adult Books

‘The Hate U Give’ Presents Realities of Driving While Black 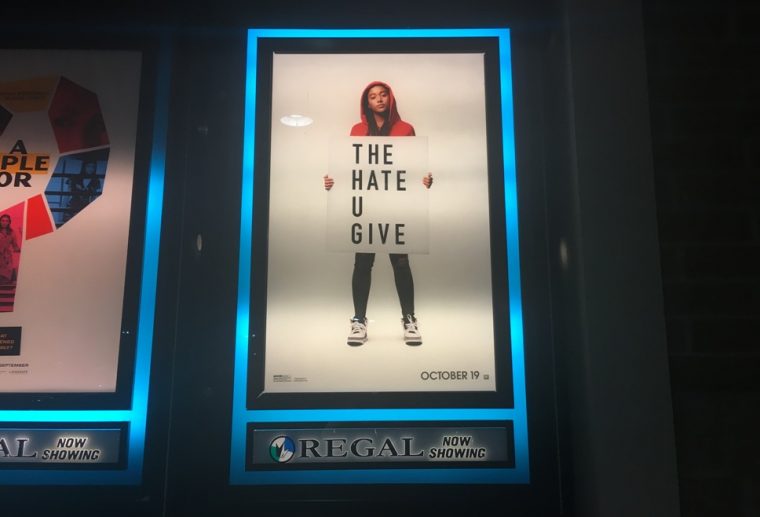 Today, The Hate U Give, a film based on the best-selling book by Angie Thomas, expands to nationwide release. It’s not the first movie released this year based on a Young Adult book, and it’s not even 2018’s first YA adaptation starring Amandla Stenberg. However, the film’s heavy take on police violence against black people, especially during traffic stops, is making America’s critics and viewers alike pause and take notice.

In the world of the film, the audience follows Starr Carter, a black teen who lives in a predominantly black community but attends a privileged white prep school. Before we even dive into those complicated feelings, however, the movie opens on Starr as a young child at the dining room table with her parents and siblings. Her father, Maverick, is giving them all the talk about what to do when pulled over by the police. He isn’t preparing them for a hypothetical situation, he knows they will be stopped eventually because of the color of their skin and where they live. Maverick’s first rule is to not only keep your hands visible but to lay them on the dashboard. From there, he tells them more about being calm and only answering the questions asked. It’s a very tense way to start a movie, but it also sets the scene for everything that is to come.

EXCLUSIVE: This morning I was given permission to show you this exclusive sneak peek of "The Talk" – an essential scene in #TheHateUGive (out Friday). Every Black family in the country has had their own version of this conversation, but no film has ever shown it quite like this. pic.twitter.com/69pxIEhuHA

If you’ve seen the trailers for The Hate U Give, you know that the focus is on what happens when police pull over Starr and her friend Khalil. During the traffic stop, Starr does everything her father told her and yet the officer still refers to her in a derogatory manner, as if she’s a drug addict or prostitute. Khalil is angry that the officer stopped him, which leads to him being pulled out of the car and frisked for a weapon. As the officer is back at his cruiser, Khalil reaches into the car to check on Starr and retrieve a hairbrush. Nothing really prepares you for when Khalil is shot. There’s no warning shout, no motion to draw Khalil’s eyes from Starr. As she runs out of the car to her injured friend, the police officer handcuffs Starr and points his gun at her instead of trying any form of first aid as Khalil dies on the pavement.

From this moment, we follow Starr through America’s legal system as she tries to get justice for her childhood friend and see what happens when her friends in the prep school can’t relate to what’s happening (or are openly antagonistic about it). Even when she confronts her uncle, a black police officer, he admits that if a young black man and a white man did the same actions, he would shoot the black man and yell at the white man to put his hands up.

As a white woman who is reasonably informed, I have of course heard of all the unarmed black people shot by police. It makes me sad that so many people are dying, and mad that police are rarely held responsible for the deaths they cause. However, most of this is not happening in my community, so it’s not something I think of on a regular basis.

Watching the movie (and reading the book) put me in someone else’s shoes and made me rethink what really is going on, and my attitude. While I like to think I’m not as bad as some of Starr’s friends, I’ve definitely said things like her boyfriend Chris, who tries to ignore race and how it makes us who we all are. My parents have certainly never had a talk with me about what to do around the police, and when I was pulled over for speeding a few years ago I did everything wrong. I realized after the interaction was through that my hands were in my lap at all times, and when the officer came up to my window I was rummaging through my glove box. Since I was white, he probably assumed I was looking for my documents. If I was black, would I have been pulled out of my car or fired because I could have been looking for a gun? Either way, the police officer who pulled me over never touched his firearm, whereas in The Hate U Give the officer walks up with his hand resting on his service weapon.

While I don’t have any illusions that one book and one movie are enough to change public perception, I hope that the story will make more white people like me realize just how privileged we are. Maybe from there, we can work to tip the scales towards balance.