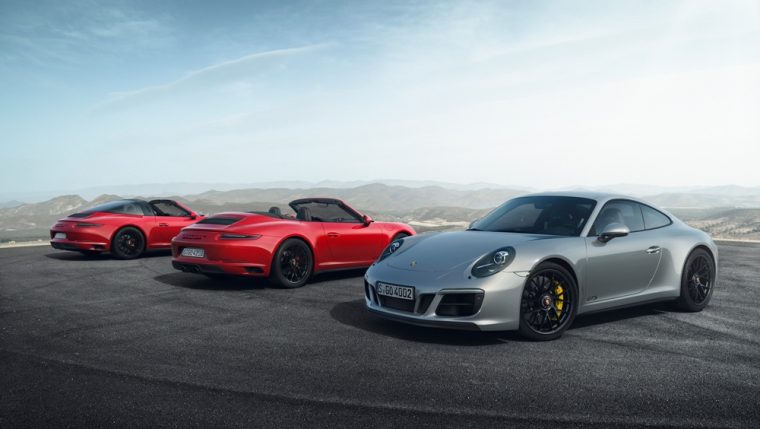 Porsche 911 enthusiasts can get the new GTS model in coupe, convertible, or Targa format

Even though Porsche decided to skip the 2017 North American International Auto Show (NAIAS), the German automaker still announced a new vehicle this week, which comes in the form of the 2017 Porsche 911 GTS.

Need A New Porsche? Check out these current offers and incentives on 2017 Porsche models

A new turbocharger has also been developed for the 2017 GTS lineup, which helps the 3.0-liter six-cylinder motor produce a total of 450 horsepower and 405 lb-ft of torque. This means the new GTS models provide an additional 30 horsepower and 37 lb-ft of torque over the Carrera S. Additionally, buyers can pair that engine with their choice of either a six-speed manual or a Porsche PDK transmission.

Besides offering a power upgrade, Porsche says the new GTS models will also corner better thanks to the Porsche Active Suspension Management (PASM) technology, which comes standard on all GTS variants. Furthermore, the GTS coupes gets the PASM sports chassis that lowers the car by ten millimeters. Some of the other notable features of the 2017 911 GTS include central black twin tailpipes, smoked taillights, and a silk-gloss black air intake grille.

Porsche is already taking orders for the new 911 GTS models and these sports cars are expected to reach dealerships in April. The 2017 Porsche 911 GTS will carry a starting MSRP of $119,000, according to Autoweek and Road and Track.

Cars 101: You hear about it all of the time, but what does torque actually mean?