The Oldsmobile Expression Concept was the future vehicle for a dystopia we never got
Photo: © General Motors

Every once in a while, an automaker comes along with a concept that is so putrid, so puerile, so profoundly and preposterously poopy that one simply can’t help but cock one’s head to one side, scratch one’s own chin, and say, “One, one kind of needs this car.” Such a car was the Oldsmobile Expression Concept, a bird-head-shaped wagon affair that debuted at the 1990 Chicago Auto Show.

Driving Tips: Gas Mileage Tips You Might Not Have Known: Pinching-Pennies Can Add Up

The Oldsmobile Expression Concept was a four-door 2+2+2 wagon that featured everything a future-thinking driver could have possibly dreamt of in the year 1990: fiberglass exterior panels, rain-sensing windshield wipers, an in-car vacuum cleaner (eat it, Honda Odyssey!), and a TV/VCR hooked up to a built-in Nintendo Entertainment System. It also had arguably the weirdest butt you’ll ever see on a car. 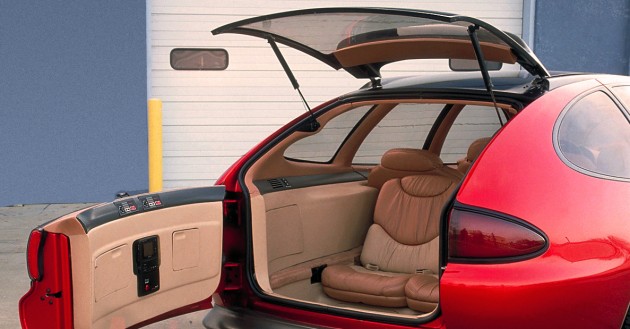 Remember your rich friend in high school who went out and saw The Fast & The Furious one weekend and then showed up to school a month later in a Celica with TVs in the headrest and a PS2 ready to rock? The Expression had that guy beat by a whole decade.

How could one possibly go about classifying the Oldsmobile Expression Concept? In a press release issued on January 3, 1990, Oldsmobile Studio 1 Chief Designer Dennis Burke said, “The Expression has the sleek styling of tomorrow’s sport sedans, but also features a host of convenience items normally associated with a more conservative station wagon.”

Oldsmobile General Manager J. Michael Losh added that Oldsmobile hadn’t intended the Expression Concept as a “frivolous exercise,” but rather as a representation of “the future direction of Oldsmobile.”

The future direction of Oldsmobile, as it turned out, was bankruptcy and brand-death. It’s a real shame, because the Expression was clearly far, far ahead of its time. Bring it back as a Buick.

That’s not a Buick (thank god)

News Sources: Jalopnik (Via: Cars That Never Made It!), Outright Olds, Autos of Interest