The Wait is Over: 2018 Ford EcoSport Finally Arriving at Dealerships in January 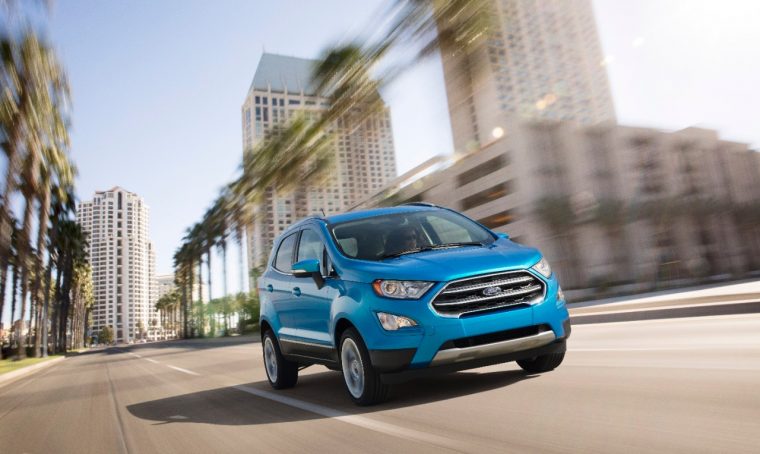 Been waiting patiently for the arrival of the Ford EcoSport? Good news: it’s time to get off your duff, get out there, and get it.

The new EcoSport began arriving at dealerships earlier this month, marking Ford’s long-awaited foray into the US subcompact crossover segment and its first product to be imported from India. Though, as Automotive News notes, Ford EcoSport’s competitors are deep into their life cycles and likely to be receiving extensive refreshes or next-generation models, analysts expect the EcoSport to sell well because of the continued growth of the segment.

Likely also helping matters will be the price point. The 2018 Ford EcoSport will be offered in four trims: S, SE, Titanium, and SES. At base, it will only set drivers back $20,990 (including $995 destination fee); at the highest trim level, it will carry an MSRP of $27,735. Ford is pushing the EcoSport as a hip choice for younger drivers and families, and the affordable sticker price should help engender the subcompact crossover to its intended audience.

“More people are choosing to spend their time and money sharing experiences with friends and family instead of buying more stuff,” said Chantel Lenard, ‎executive director, Ford U.S. marketing, when the EcoSport was announced in November 2016. “EcoSport fits perfectly into this growing lifestyle. It’s our smallest SUV, packed with features and personality.”

Standard with front-wheel drive, the 2018 EcoSport is offered with a 1.0-liter EcoBoost turbo three-cylinder. With optional Intelligent 4WD—standard on the EcoSport SES—the EcoSport is equipped with a 2.0-liter Ti-VCT GDI engine.