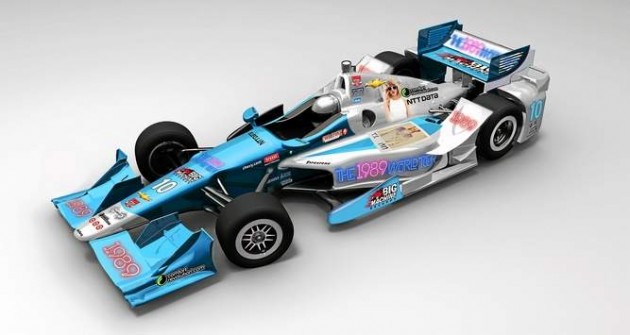 Never ever ever in our Wildest Dreams did we think we’d see T. Swift’s perfect face adorning the cockpit of an IndyCar. But now that we know an automobile can look this fabulous, Everything Has Changed.

Cuz darling, it’s a racecar dressed like a daydream.

Apparently there was a Blank Space on the side of former Indy 500 champion Tony Kanaan’s car, so he upped his vehicle’s considerable Style by putting a big honking Taylor Swift decal there. Hopefully, driving at speeds of 225 mph doesn’t Shake it Off.

With a newly designed aero kit and around 700 White Horsepower in its V6 engine, the No. 10 Taylor Swift, Big Machine Records car will be very… swift. And while there have been a rash of bad IndyCar crashes lately, the Holmatro Safety Team should keep Kanaan Safe and Sound.

And with that, we have officially exhausted The News Wheel’s Pun Research Department.

You can go home now, Gary.

Taylor herself will be performing at Detroit’s Ford Field on Saturday, May 30th, the same weekend as the Verizon IndyCar Series racing doubleheader.

“It’s really cool to have Taylor Swift and Big Machine Records on the No. 10 car in Detroit,” said driver Tony Kanaan. “Big Machine Records has been a really good partner for both myself and the team, and I think it’s great that we get to promote their biggest stars out on the race track. I’m hoping that some of Taylor’s luck we saw last weekend at the Billboard Music Awards will carry over with me into our doubleheader in Detroit.”

Whatever, Kanaan… You think you’re so awesome, with your Indy record that’s much cooler than mine…