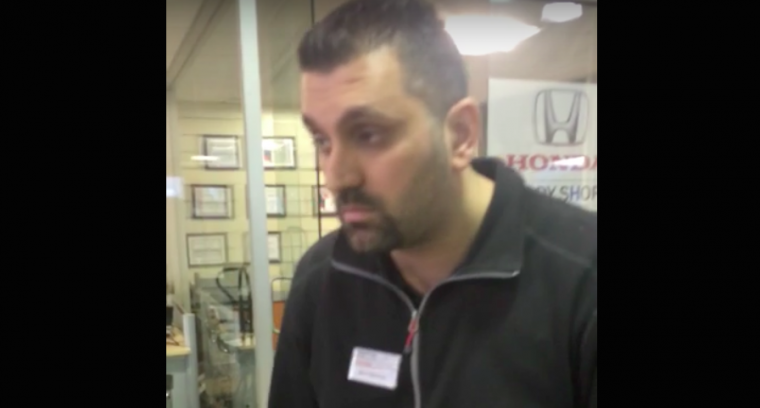 A YouTube user named jacknhoff (possibly a pseudonym) recently captured a bizarre medical curiosity on camera. In the video (below), which was posted on December 12th and shot to the top of Reddit’s front page the same day, a Toronto Honda dealership employee appears to lose his sense of hearing mid-conversation, and is left repeating the phrase “I can’t hear you” over and over.

What makes the poor man’s sudden affliction so strange is the fact that there is no inciting incident—no weapon being discharged close by, no loud music, no nothing. The man recording the confrontation merely complained that the dealership’s body shop had dented his vehicle and asked for the employee to acknowledge that they were the ones who caused the damage, when suddenly the Honda employee couldn’t seem to hear a damned thing:

Weird, right? To his credit, the Honda Toronto employee seems to take his newfound deafness in stride. His loss of hearing does make it sadly impossible for him to continue conversing with jacknhoff, though. The coworker seated next to him probably could have attempted to step in and provide customer service to Mr. Hoff, were it not for the fact that he is quite clearly a mute.

Interestingly, jacknhoff does not believe that the Honda employee actually suffered spontaneous hearing loss, but rather that the man was merely pretending not to hear him. That theory is hard to swallow, though, because it requires us to entertain the notion that a Canadian might be rude to someone.

Here’s the full story, though, straight from the jacknhoff’s mouth:

Brought my 2010 Honda Civic into Toronto Honda to have my front bumper repainted due to there being an issue with the clear coat (bubbling and paint fading). I went in today (nearly 3 hours of driving) to pick up my car and drop off my rental car. When I approached the body shop desk, I told them who I was and they gladly took the rental keys from me and told me to go to reception for my car keys. When I got to the receptionist she gave me my keys and told me to have a good day. This was odd considering they usually go and do a walk around of the vehicle. I asked about it and she assured me that they don’t need to do it right now and that if theres anything wrong later, they have my contact information and credit card.. being a little weirded out I decided to record a walk around of the rental vehicle with my own phone just incase and then headed straight for my car. The very first thing I did was inspect the front bumper, and what do I see? A 4-5 inch deep scratch and what I believe is a dent. So I go inside, end up filming this video and another where I was in a screaming match with a manager. I asked for written acknowledgment of the damage from both the body shop desk and the management desk and was refused and treated like absolute garbage. I was denied a rental car (until my car was fixed) and denied written or video recorded acknowledgment of the damage done to my car while in their possession. After loudly fighting with the manager for 5 minutes (which is video recorded), he tells me to “disappear” and go get a rental at the end of the video.

Jacknhoff also posted a photo to Imgur which he claims shows the large scratch that the dealership left on his 2010 Honda Civic: 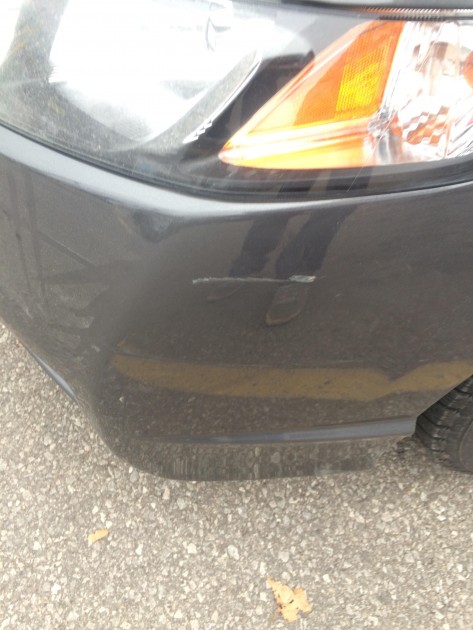 The video of jacknhoff “loudly fighting with the manager for 5 minutes” has not been posted, and the original Reddit thread has already been locked due to “witch hunting and people posting personal information in the comments.” (I presume the personal info they’re posting is the phone number of a good ear, nose and throat doctor that this Toronto Honda dealership employee can go see about his deafness.)