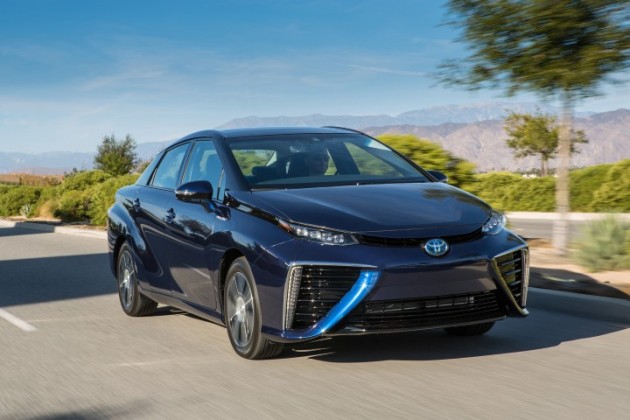 Toyota will be celebrating not one, but two anniversaries today in a special appearance at the National Mall in our nation’s capital—the 45th anniversary of Earth Day and the 15th anniversary of its Earth Day showcase of a then-unknown hybrid car called the Prius. To cement the importance of both dates, Toyota will be replicating its stunt from 2000 by displaying the latest vehicle in its ongoing quest to make personal transportation cleaner and more Earth-friendly—the 2016 Mirai hydrogen fuel cell vehicle.

Toyota will be teaming with Earth Day Network as the sponsor for the Global Citizen 2015 Earth Day celebration, which runs from April 17-19 in DC.

“The Toyota Mirai represents a turning point in automotive history,” said Bob Carter, senior vice president, automotive operations, Toyota Motor Sales, U.S.A., Inc. “After more than 20 years of research and development, we are excited to bring Mirai to American driveways. Earth Day 2015 is a great platform to educate the public about hydrogen fuel cell technology and the potential of hydrogen as a future fuel.”

Toyota will also be promoting its Mirai and sustainability as a whole in separate festivities in New York and Los Angeles. Toyota will sponsor an interactive display that will be viewable in Union Square Park, New York on April 19th, and the Mirai will be a part of the Waterkeeper Alliance’s “Keep it Clean” comedy event on April 22nd.

The Mirai, Toyota’s revolutionary hydrogen fuel-powered sedan, is expected to get 300 miles on a single tank that can be refilled in 5 minutes. The Mirai is scheduled to arrive in California later this year.

“Toyota has been a committed partner in creating solutions and momentum for a cleaner, better planet,” said Kathleen Rogers, president of Earth Day Network. “We are proud to help educate about the possibilities for fuel cell technology and advocate around a shared vision for the environment.”