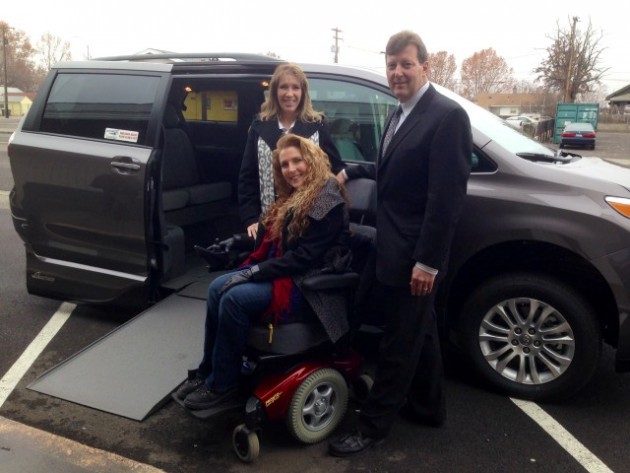 Back in April, Toyota and Vantage Mobility International (VMI) announced the beginning of the second annual Star Spangled Salute contest. Now, Toyota and VMI have presented the winner with a wheelchair-accessible 2015 Toyota Sienna minivan to help make her life that much easier.

Susan Kirsch is a disabled veteran of the US Air Force who suffered a spinal injury during a war game training maneuver. She also has a disabled son, meaning that both of them will benefit greatly from the addition of this new Sienna to their family. The minivan, donated by Toyota, features a Northstar Access360 in-floor side-entry ramp conversion, which was donated by VMI.

“Toyota is honored to, once again, donate a Sienna as a way of showing our appreciation to the men and women who bravely served our country,” commented Mark Oldenburg, Toyota’s National Fleet Marketing, Mobility and Strategic Planning Manager. “Susan Kirsch is an inspiration to millions of Americans.  She bravely served our nation and perseveres today by refusing to let her disability prevent her from raising a family. Delivering the Sienna conversion van to Ms. Kirsch is Toyota’s small way of saying, thank you.”

The Star Spangled Salute contest was created as part of VMI’s Operation Independence. This program helps teach US veterans about the various grants available to them, and assists first-time buyers to ensure that they are getting the perfect vehicles for their lifestyles. This year—the second for the contest—saw over 1,800 veteran applicants from across the US and Puerto Rico.

If you know a disabled veteran who could benefit from a wheelchair-accessible vehicle, look out for the next Star Spangled Salute contest, which should be announced in the spring.