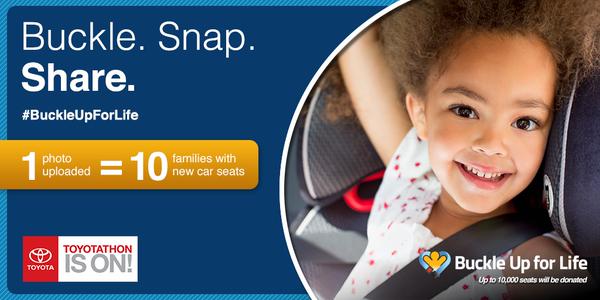 Making sure your child is safely secured in his or her car seat is any parent’s top priority. Yet, shockingly, three out of four car seats are incorrectly installed. To help educate parents and turn those numbers around, Toyota and Cincinnati Children’s Hospital have paired up to launch the Buckle Up for Life program, which helps educate parents on the correct way to install child safety seats in their cars.

The latest campaign in the program calls for parents to upload pictures of their children (both two- and four-legged) safely bucked into cars to Twitter or Instagram using the hashtag #buckleupforlife. For every photo uploaded between now and December 31st, Toyota will donate 10 car seats to the Buckle Up for Life Program.

Monica Womack Peterson, director of social media strategy and operations at Toyota, remarked, “The easiest way for people to get involved is to post a photo to their own social media accounts with the hashtag and rally their friends and family to do the same.” This campaign is just one in a long line of social media campaigns designed to get customers interacting with Toyota in order to generate charitable donations. Last year, the Japanese automaker donated a total of $200,000 to the Boys & Girls Clubs of America, giving a certain amount every time a user interacted with Toyota via social media.

So grab your smartphone, snap a picture of your tot snuggled into his or her car seat, and upload it to your Twitter or Instagram account using #buckleupforlife. It only takes a couple of minutes, but by doing so you’ll be helping parents who can’t afford quality car seats for their little bundles of joy.