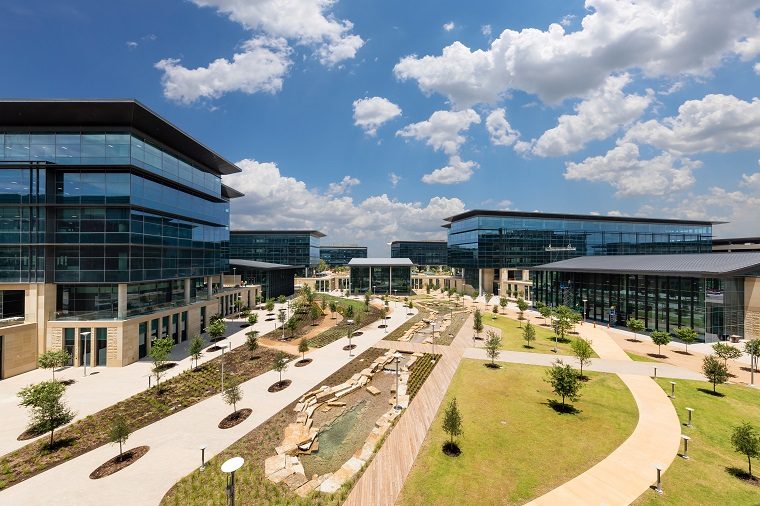 Toyota has finally opened its new North American headquarters in Plano, Texas, three years after announcing the move. The grand opening coincides with Toyota celebrating 60 years in the United States. Over the last 57 years, it had been headquartered in the Los Angeles area.

“With team members from four different companies together in one campus location, we believe this will inspire greater collaboration, innovation, and faster decision making as we turn to and lead the future of mobility, all with an eye on our customers,” said Jim Lentz, Toyota’s North American CEO.

The new headquarters occupies an area covering 100 acres of land, including 2 million square feet of corporate work space. More than a third of all electricity consumed by the headquarters will be provided by 20,000 on-site solar panels and much of its water will be derived from the massive cisterns installed above four parking structures, which are able to store 400,000 gallons of rainwater. Toyota has also seen it fit to plant drought-resistant plants because, you know, it gets pretty hot and dry in Texas.

That could be part of the reason the Japanese automaker was only able to fill 75% of the 4,000 positions open at the headquarters, as not all of the original team members at the Los Angeles headquarters were willing to relocate to Texas—and considering the states’ different climates and sociopolitical values, it’s perhaps no surprise.

Still, Toyota and Texas are confident they will be able to fill the remaining 1,000 positions in a short time. “The greatest resource we have here in the Lone Star State is our highly-skilled workforce that draws global businesses like Toyota to Texas every day,” said Governor Greg Abbott.