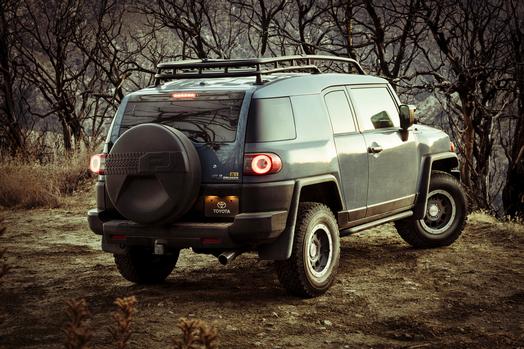 2014 is the last year Toyota will make its retro-inspired FJ Cruiser. The sporty SUV, which first debuted in 2006, always appealed to those looking for style over practicality, since Toyota’s 4Runner offers more utility than the FJ Cruiser but lacks its funky looks. Now, with sales dwindling in recent years, Toyota has decided it’s lights out for the FJ Cruiser—but the eye-catching model won’t be going away quietly.

For its final curtain call, Toyota will build 2,500 FJ Cruiser Ultimate Edition models that will appeal to the die-hard fans of this uniquely styled SUV. The Ultimate Editions will come with a white grille surround that contrasts against the Heritage Blue paint, designed to remind fans of the classic Jeep-like Land Cruiser FJ40. Other special touches will include TRD bead lock wheels with BF Goodrich All-Terrain tires, a thick aluminum skid plate, and coil-over Bilstein front suspension and remote-reservoir rear shocks.

They say that all good things must come to an end, and that’s certainly the case with the FJ Cruiser. We will definitely miss its quirkiness and toy-like appeal, but we’re happy we’ll still be able to see it on the road for years to come. And who knows, maybe one day the FJ Cruiser will make a triumphant return. Until then, we’ll be over here hoping Toyota brings its Supra successor out sooner rather than later!