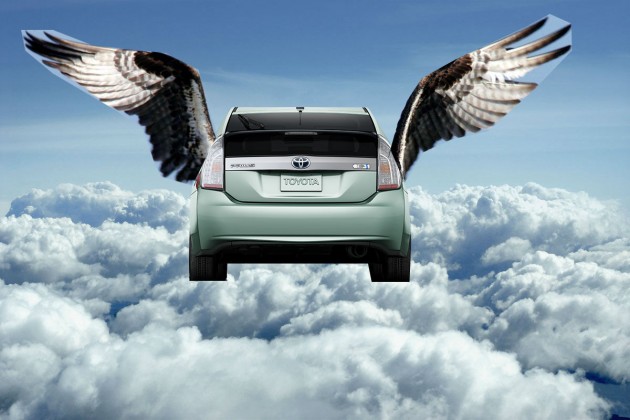 If you’re anything like us, you’re probably disappointed that it’s the year 2015 and there are still no flying cars on our roads skies. Sure, some pretty awesome prototypes exist, but many issues face their readiness for production, as the YouTube series Thought Glass recently explained. But there’s one automaker that tends not to let logistics stand in its way—Toyota. The Japanese company filed for a patent called “Stackable wing for an aerocar” back in March 2014, and that patent was just approved. 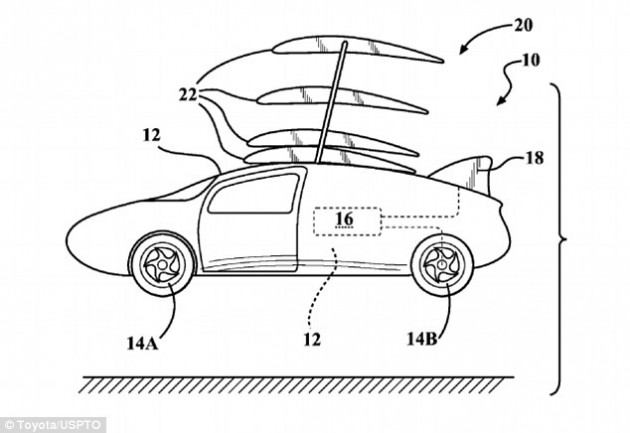 This is the actual, much less interesting rendering

Now, the renderings of this stackable wing aren’t exactly what you might imagine. Forget the futuristic flying cars you’ve seen in cartoons and movies—this flying car looks more like the early prototypes created by the likes of the Wright Brothers. Rather than having two wings sprouting from the sides of the vehicle, Toyota’s aerocar has four rotating wings on its roof that can be launched at the touch of a button. Each wing can be deployed individually to change the amount of lift generated, which would presumably allow the car to maneuver through the sky more easily. From the patent itself:

The wing can include an upper surface of generally fixed shape and a lower surface configured to morph between a stowed shape and a deployed shape. The stowed shape is suitable for stacking the wing atop the aerocar in combination with additional wings in a roadable mode. The deployed shape is suitable for providing lift to the aerocar in a flight mode.

Patents are granted all the time that never lead to anything, so no one can say for sure whether Toyota will actually build a prototype of its retro-looking aerocar. But if nothing else, this gives us hope that we will see flying cars in our lifetime.