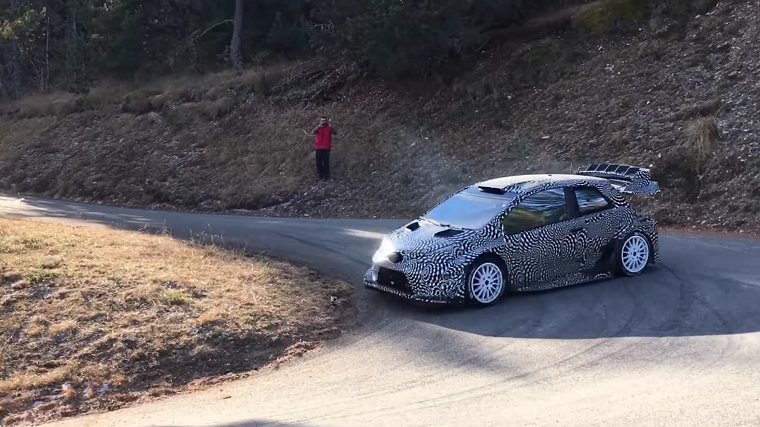 We’ve known for a while that Toyota Gazoo Racing was prepping the little Yaris hatchback for the World Rally Championship (WRC), but little did we realize how excited we would be to see it in action until we saw the test mule doing its thing—and now we just can’t stop wanting more.

The 2017 Toyota Yaris WRC, piloted by none other than Finnish rally driver Jari-Matti Latvala and longtime copilot Miikka Anttila, has been spotted testing in various locations and sounds furiously angry at every stage of each corner, as though it were at war with its own exhaust.

Toyota’s return to the WRC will mark the end of a 17-year absence. The Yaris will be powered by a 1.6-liter four-cylinder engine that is said to make 375 horsepower and 313 lb-ft of torque. However, what’s more exciting for everyday drivers that don’t get to wrestle a rally car for a living is that it is very likely to be followed by a production hot hatch, and we love the idea of putting the pedal to the metal in a little Yaris with some 200 ponies under the hood.

The #YarisWRC will have a direct impact on expanding the Yaris line-up with a performance oriented version pic.twitter.com/HbtrABV3pr

The current version of the Yaris makes only 106 horsepower and 103 lb-ft of torque from a 1.5-liter four-cylinder, but after posting a sketch of a Yaris hot hatch on its European social media pages and declaring that it may use the Gazoo sub-brand to compete with BMW M and Mercedes AMG, there’s every reason to believe that Toyota’s WRC competitor will inspire a performance-oriented, road-going hatchback to compete with the Ford Fiesta ST and the like.

The only real question that remains is whether it will come to the United States. We certainly hope so. In the meantime, check out the 2017 Toyota Yaris WRC test mule getting massive air and shredding dirt and snow in the videos below.